In a ceremony at the Knesset, Yohanan Plesner, President of the Israel Democracy Institute and Theodor Or, Israeli Supreme Court Justice Emeritus and chair of the Award Committee, presented the Outstanding Parliamentarian Award to Yaakov Margi (Shas) and Itzik Shmuli (Zionist Union) 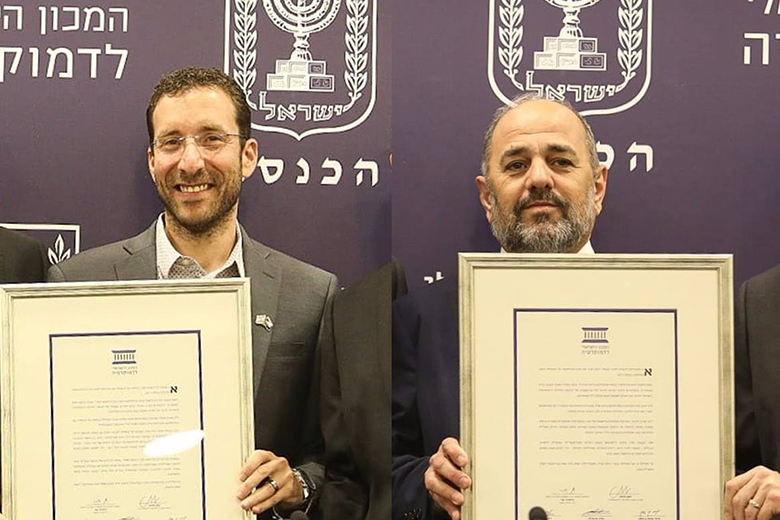 In a ceremony today at the Knesset, Yohanan Plesner, President of the Israel Democracy Institute and Theodor Or, Israeli Supreme Court Justice Emeritus and chair of the Award Committee, presented the Outstanding Parliamentarian Award to Yaakov Margi (Shas) and Itzik Shmuli (Zionist Union)

Speaker of the Knesset, Yuli Edelstein said: “I would like to thank the Israel Democracy Institute for this important project. I am happy that the award went to two outstanding and energetic Members of Knesset. Although these two hold different worldviews, they both have proven that you do not have to resort to provocations to be an effective parliamentarian. We are spearheading a move that will expand the tools at the MK’s disposal and improve his or her ability to oversee government activity.

Yohanan Plesner, President, Israel Democracy Institute stated: “What MKs Shmuli and Margi have in common, along with many other MKs, is their dedication to representing the public’s interest and welfare. They both defend and give a voice to disadvantaged populations, and contribute to the dignity of the Israeli Parliament.

Plesner also referred to the Nation State Bill discussed yesterday in the Knesset, and noted that the wording of the current law indicates that there is a desire to fundamentally change the constitutional and moral character of the state of Israel. As Plesner pointed out, there is no other reason why the expression "a Jewish and democratic state in the spirit of the principles of the Declaration of Independence" would be omitted from the opening paragraph of the law. Plesner called on the Knesset members to reconsider the promotion of the law in this manner and to replace it with a balanced formula that would express broad agreement and reflect a larger common denominator in the Israeli public. "

MK Itzik Shmuli, Zionist Union: “for me this award is not only recognition of past work – but also a directive for the future. Every day on my way to the Knesset I think of those with no voice, who do not have the power to speak up in their own defense - Holocaust survivors, lone soldiers and even animals. It is the Knesset's responsibility to provide them with protection. I believe in an Israel in which human diversity is not threatening but fascinating, where my worldviews do not cancel out others and where disagreement does not lead to slander and insults."

MK Yaakov Margi, Shaas: “I find it comforting that an organization such as the Israel Democracy Institute has decided to honor me with this award, even though I have avoided provocations. Even when we are angry or critical - we have no other Knesset. I am from Beer Sheeva, the middle child among 11 siblings, and I would like to thank the State of Israel for the opportunity given to me.”

The following are the main reasons given by the award committee headed by Emeritus Justice Theodore Or and the panel of judges: Prof. Menahem Ben Sasson, Dr. Leah Ness, Prof. Gabriela Shalev and former ministers Galeb Majadele and Ophir Paz Pines:
MK Itzik Shmuli’s parliamentary activity exemplifies the optimal connection between a MK’s two main functions: legislation and supervision. He does this by actively supervising the government's work through consistently being presence in the committees, by submitting queries and proposals for the agenda, and by passing laws that aim to benefit the public. As part of his work in the Knesset, Shmuli dedicates his time to social issues - to integrating people with disabilities into employment in the public sector and to expanding support for children with cancer, disabled people, Holocaust survivors and the elderly.

MK Yaakov Margi, is Chair of the Committee on Education, Culture and Sport, and oversees the executive branch on a variety of issues , including parental payments to schools, discrimination against Ethiopian students and the reform of special education for children. MK Margi uses a variety of tools at his disposal to promote a range of important social issues, especially education.

This is the seventh time the Outstanding Parliamentarian Award is being awarded by the Israel Democracy Institute, with the aim of recognizing Members of Knesset who have excelled in their role and shown diligence, responsibility and effective use of parliamentary tools. Each year, the award is given to two MKs – one from the opposition and one from the coalition. The process includes quantitative and qualitative analysis of parliamentary actions.