A majority of Israelis gave high grades when assessing Israel’s preparedness for war in three areas: the IDF’s combat readiness, the resilience of the population on the home front, and the political echelon’s decision-making ability concerning the objectives and management of the war. At the same time, Israelis do not think highly of the preparedness of the home front regarding protection of civilian facilities. 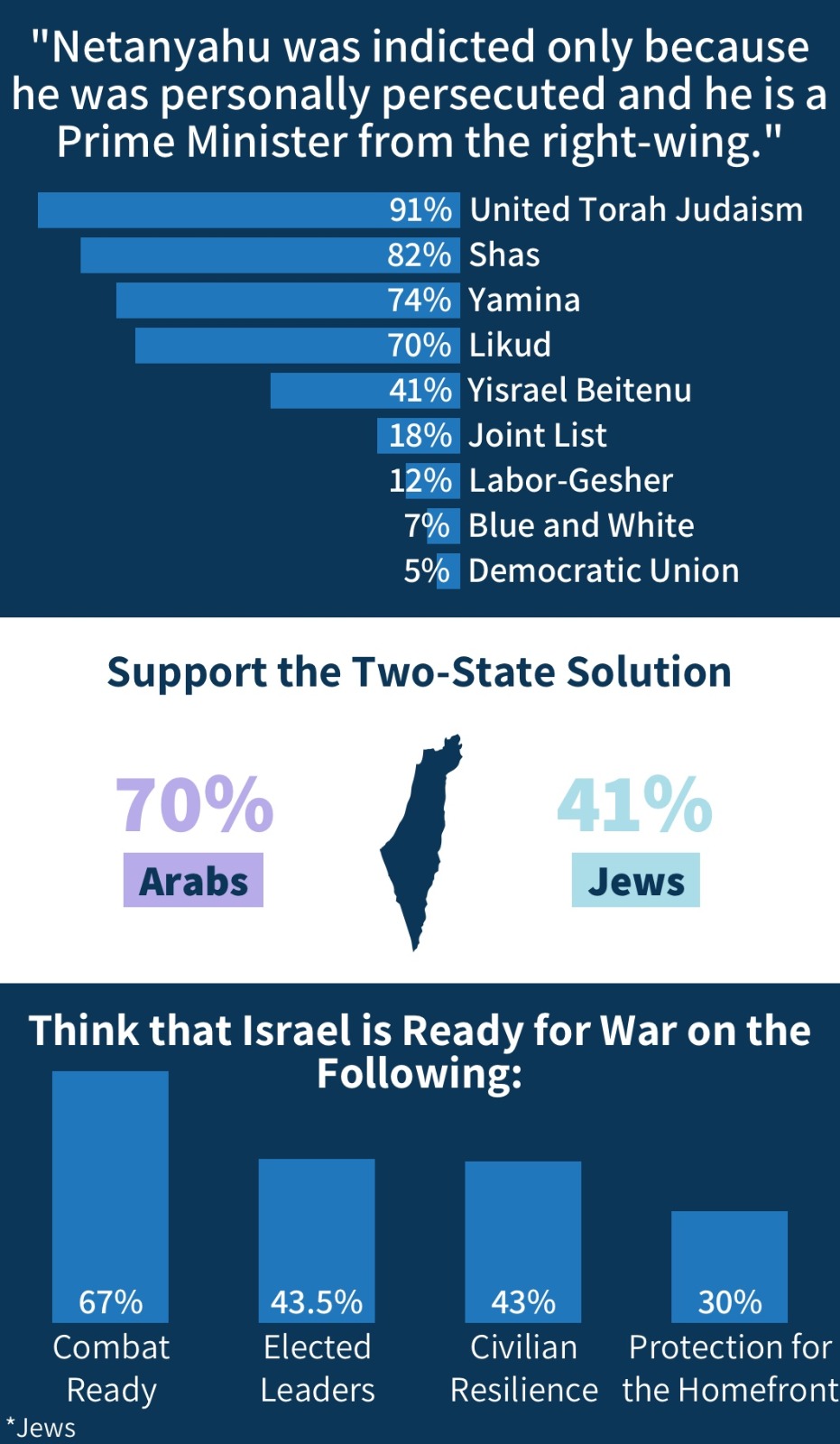 * While compared to the previous month there was indeed a slight improvement in Israelis’ degree of optimism about the future of democracy, the measurement for the month shows that the majority is still pessimistic on the issue. This pessimism is especially pronounced among the Jewish left and the Arab public.

* On the question of whether or not to annex the West Bank/Judea and Samaria, we found that a majority of the Arab public rejects such a measure. However, the Jewish public as a whole is split, with a larger rate of “Don’t knows” than usual. On the right a small majority favors annexation while on the left and in the center the scale tips in the opposite direction.

* On the question of the pending unifications of the small parties on the right and the left, it turns out that the public takes no clear view of whether such moves would strengthen the camps to which these parties belong. What is clear is that in each camp, the assessment is that a unification of the small parties belonging to it would strengthen it in the upcoming Knesset elections, but not necessarily for the other camp.

* On the question of whether the leveling of the charges against Netanyahu constitutes personal persecution, the public’s positions are divided according to political camps: the majority of the Arab public, and also of the Jewish center and left, does not think personal persecution is not involved while on the right the majority believes Netanyahu is indeed being personally persecuted.

* And for the end of the year – the public’s assessments of the functioning of the state are not flattering except in the security domain, where the situation is a little better though here, too, the evaluation is not a glowing one.

The future of democracy – The rate of optimists about the future of democracy indeed rose slightly in the December measurement compared to November, but it still is lower than all the measurements since April. The gaps between the (Jewish) political camps are large: on the left only 21% are optimistic, in the center - 38%, and on the right - 50%. The disparity on this issue between Jews and Arabs is considerable: for the Jewish public as a whole, the rate of optimists stands at 42%, while for the Arab public as a whole it comes to only 31%. At the same time, it is important to make clear that the balance between the optimists and the pessimists leans toward the negative among Jews as well. It is also interesting to see that the rate of optimists among the Arabs is higher than on the Jewish left (31% vs. 21%).

The two-state solution – We asked: “If Israel and the Palestinian Authority were to reach an understanding on the terms of a peace agreement, would you support or not support the agreement if it includes dividing the Land of Israel into two states, Israel and the Palestinian state?” The support-opposition balance in the Jewish public leans to the negative side: 48% would oppose such an agreement and 41% would support it. There is a significant change here compared to the previous time this question was asked in the Peace Index of August 2017, when 47% said that in those circumstances they would support the two-state solution and 42.5% said they would nevertheless oppose it.

Among the Arabs the large majority (70%) supports the two-state solution (a decline from 86% support for this solution in the Peace Index from 2017), with the rate of those who are sure they would support it standing at 50%.

Annexation: Yes or no? – We asked: “Are you in favor of or opposed to the annexation of all of Judea and Samaria/the West Bank to Israel?” The Jewish public is split: 40% are in favor and exactly that rate are against, with 20% answering that they don’t know. Three years ago the rate of support for annexation among the Jewish public was slightly higher (46%). A segmentation by political camps reveals that, as expected, on the left and in the center only a minority is in favor of annexation (15% and 24% respectively) whereas on the right there is a majority, albeit small, that supports it (52%).

An interesting finding here concerns the “Don’t knows”: their rate is higher than usual on the questions we are asking, but it is especially high in the center, where about one-fourth (23%) are not sure whether they are for or against annexation. It may be that this datum reflects the Blue and White Party’s ambiguity on this issue. On the right the rate of “Don’t knows” stands at 19% and on the left at 15%. It should perhaps be noted here that this question did not address the rights that would be granted to the Palestinians in case of annexation, an issue on which the gap between the left and the right is very deep as we learned in the past.

Should Israel cooperate or not cooperate with an investigation by the International Criminal Court in The Hague on the issue of war crimes in the territories? (%, Jews, and Arabs)

The gap between the political camps (Jews) is large, with the center closer to the right on this issue than to the left: on the left the majority is in favor of cooperating with the court, in the center the scale tips more to noncooperation, while on the right an overwhelming majority supports noncooperation with the investigation. It is also interesting to discover that the issue apparently evokes greater perplexity on the left, where the rate of “Don’t knows” is the highest.

Against the backdrop of Chief of Staff Aviv Kochavi’s recent statement that war is a last resort but sometimes the necessary solution, we wanted to know how the public assesses Israel’s preparedness for war in four areas: the IDF’s military capabilities, the preparedness of the home front regarding protection and so on, the resilience of the population, and the political echelon’s decision-making ability concerning the objectives and running of the war. As the diagram below shows, the Jewish public rates Israel’s preparedness for war higher than the Arab public does, except in the field of home-front protection where both publics give an almost identically low assessment.

The aspect about which the Jewish public is more assured is the IDF’s military-combat readiness capability (though here too the picture is not really rosy…), but for the three other areas the sense of confidence in preparedness is relatively low. This finding dovetails with the results obtained for assessments of the functioning of the state over the past year, an issue that is presented at the end of this column.

With Elections on the Way

Will a unification of parties on the right/left strengthen or weaken the right-wing/left-wing bloc in the upcoming Knesset elections? (%, entire public)

The Supreme Court’s authority to rule on the right of someone charged with crimes to form a government – Whereas in the Arab public a majority thinks the authority on this issue has been given to the Supreme Court (52%), in the Jewish public the highest rate thinks the choice should be left to the population in the elections (46% vs. 42.5%). In addition, we found that on the left and in the center (Jews), a clear majority says it is within the Supreme Court’s authority to decide whether someone charged with a crime can or cannot form a government (66%, 65%), while on the right the majority believes the decision should only be in the hands of the population in the elections (60%).

At the same time, the differences between the right-wing parties are large: the voters for the haredi parties are the strongest supporters of leaving the decision in the hands of the population (Torah Judaism 94%, Shas 85%), while among the Likud voters there is also a majority but it is considerably smaller (63%). Yisrael Beiteinu voters are evenly split with 43% recognizing the prerogative of the Supreme Court on this matter while the exactly identical rate wants to leave the decision in the hands of the population in the elections.

Is Netanyahu being personally persecuted? We asked: “Prime Minister Netanyahu claims that he is being charged with crimes only because of personal persecution stemming from the fact that he is a prime minister from the right-wing camp. Do you agree with or oppose this claim?” In the public as a whole, 40% agree with Netanyahu’s claim that he is being personally persecuted compared to 49% who do not agree. However, a segmentation by political camps (Jews) shows, as expected, that the gaps between the political camps are very large. On the left and in the center, only few think Netanyahu is being charged with crimes out of personal persecution compared to a large majority on the right who do think so (62%).

Prime Minister Netanyahu claims that he is being charged with crimes only because of individual persecution stemming from the fact that he is a prime minister from the right-wing camp (%, Jews)

A segmentation of the positions on this question by Knesset voting reveals that, similar to the segmentation by parties on the question about the Supreme Court’s authority to rule on whether someone charged with crimes can form a government, in this case the haredi parties agree to the largest extent that Netanyahu is being charged with crimes only because of personal persecution, among the Likud voters 70% concur with that claim, while in Blue and White and the left-wing parties a large majority rejects it.

Netanyahu is being charged with crimes only because of personal persecution stemming from the fact that he is a prime minister from the right-wing camp (%, entire public)

With the civil year coming to an end, we looked into the public’s assessments of the functioning of the state over the past year in different areas: economic, security, the leaders’ attentiveness to the public, the way the political system functions, and reducing the gaps between the different groups in the society.

Whereas in the security domain almost of the public (47%) gave the state’s functioning over the past year a grade of good or excellent, in the economic domain less than a third (31%) think the state of Israel functioned well or excellently. In the three other spheres the Israeli public gave the state a low grade (“not good” or “poor”): the leaders’ attentiveness to the public (54%), reducing the tensions between the groups in the society (64%), and the functioning of the political system (64.5%).

The functioning of the state in 2019 in the different areas (%, entire public)

The Israeli Voice Index is a project of the Guttman Center for Public Opinion and Policy Research of the Israel Democracy Institute. In the survey, which was conducted on the internet and by telephone (supplements of groups that are not sufficiently represented on the network) from December 30, 2019, to January 1, 2020, 600 men and women were interviewed in Hebrew and 150 in Arabic, constituting a representative national sample of the entire adult population of Israel aged 18 and older. The maximum sampling error for the entire sample was 3.7%± at a confidence level of 95%. The fieldwork was done by the Rafi Smith Institute under the direction of Rafi Smith. For the full data file see: Data Israel