Fourteen days after the election, the 25th Knesset will be sworn in. This is the fifth Knesset inauguration in less than 3½ years—testimony to the political crisis which Israel is undergoing. How many new MKs are there? Will the stagnation in female representation continue? How many MKs have a background in local government?

Twenty-three of those taking their oath as members of the 25th Knesset are first-time parliamentarians—seven from the Likud and another seven from the Religious Zionism list. Another three are returning to the house: Danny Danon and Nissim Vaturi of the Likud and Yusuf Atawana of Hadash-Ta’al. The most senior MK is Moshe Gafni, first elected to the Knesset in 1988. He is followed by Benjamin Netanyahu, who was also first elected in 1988 but did not serve in the 15th Knesset (1999–2003). 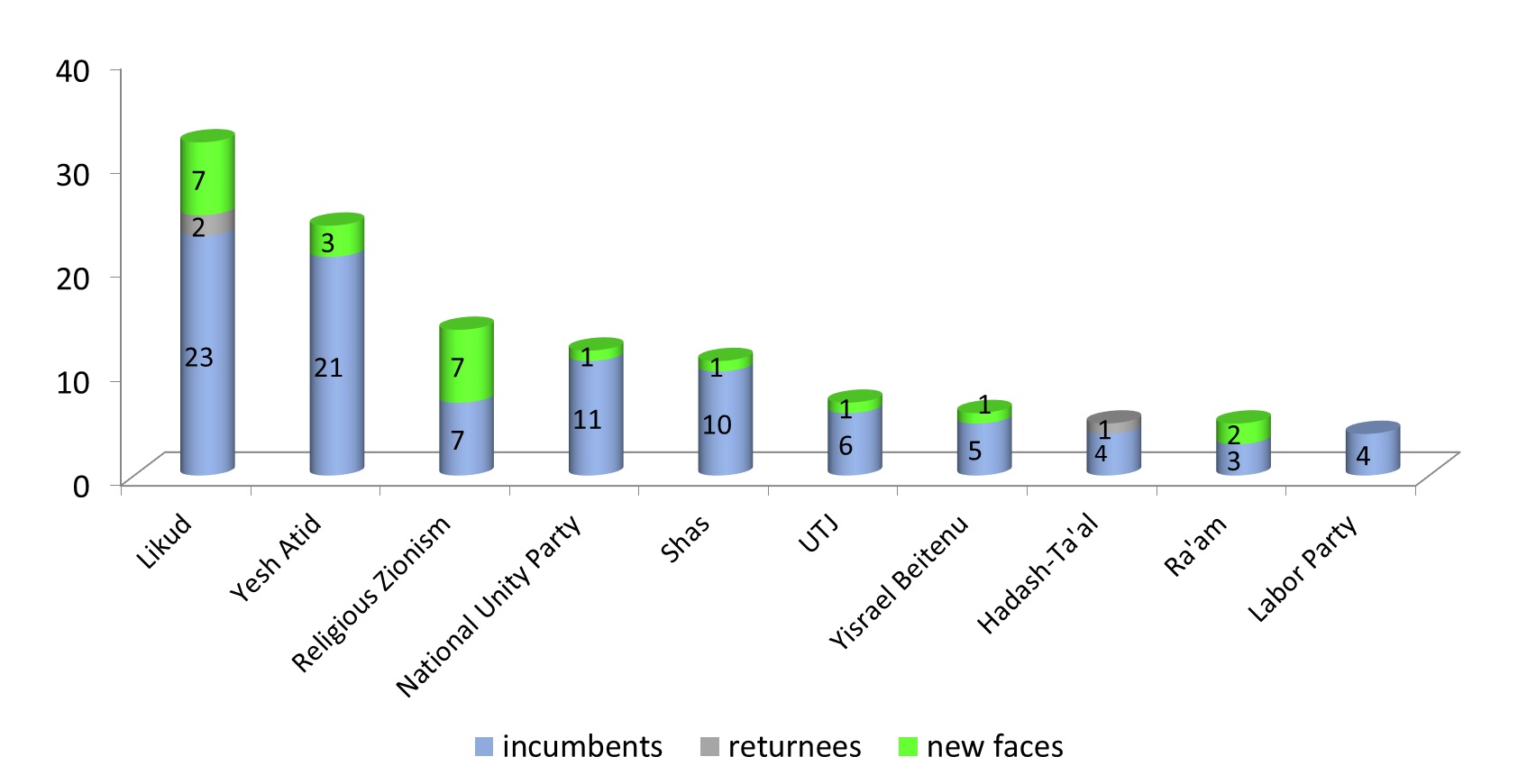 In the elections between 1988 and 2015 there was an almost consistent increase in the number of women who won seats in the Knesset: From only seven in 1998 to 29 in 2015. In the five elections, since then, the situation has been frozen, with between 28 and 30 women elected each time. Womens' representation in the outgoing Knesset hit an all-time high of 36, as a result of the switches in MKs as a result of the “Norwegian Law.” This arrangement allows MKs who were appointed as ministers to resign from the Knesset and make way to other candidates from their list. The new Knesset will begin with 29 women, but the number may rise if the "Norwegian Law" is implemented.

The faction with the most women (nine) is Yesh Atid. Women constitute a majority only in the tiny Labor faction—three out of its four MKs. Shas and United Torah Judaism continue to be men-only clubs. As a result, the coalition that is expected to support the 37th Government will have only nine women among its 64 members (14%). The opposition, in sharp contrast, will have 20 women out of 56 (36%). 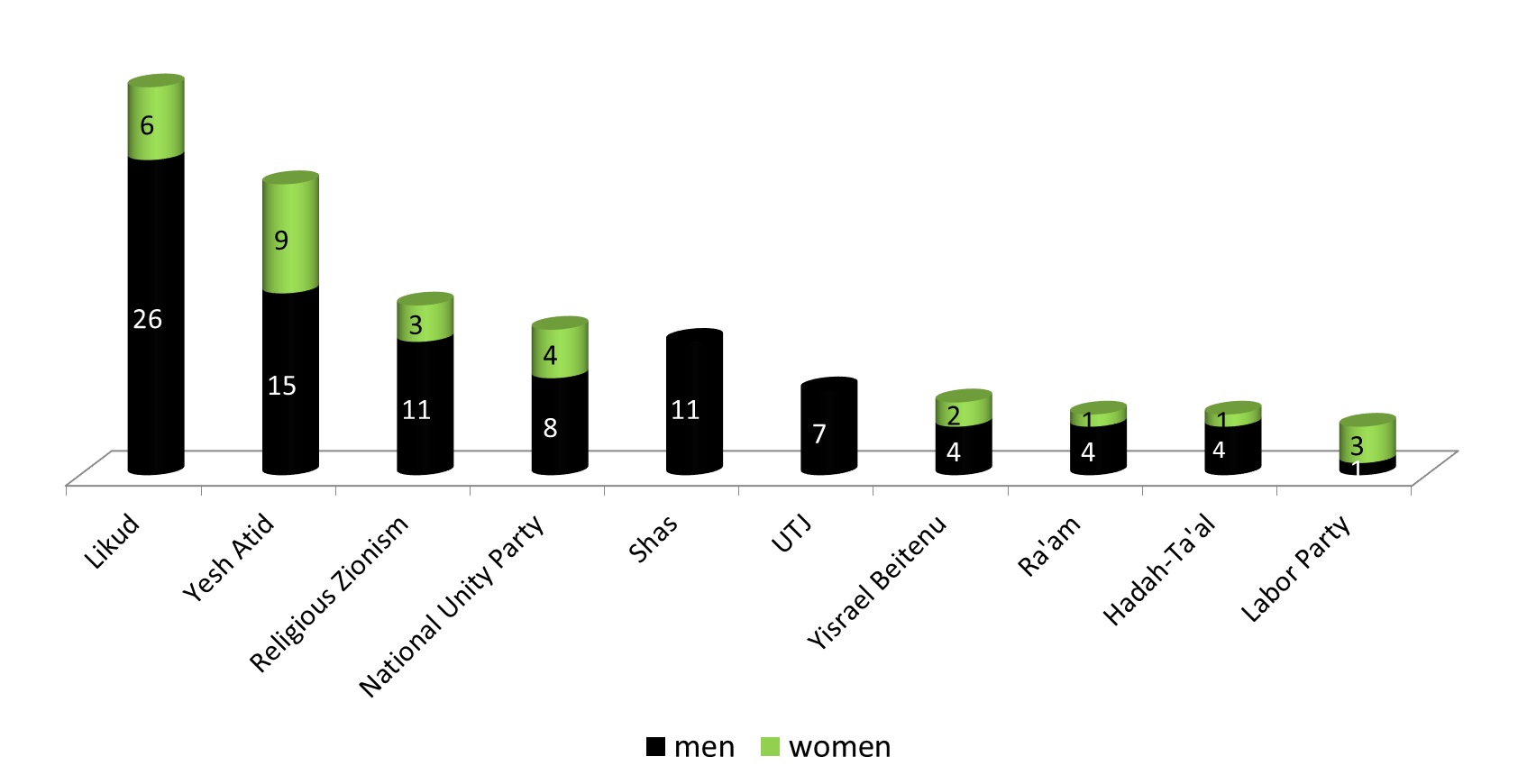 In these elections, the parliamentary representation of the largest minority in Israel shrank to its lowest size in the past two decades: The 25th Knesset will have only 10 non-Jewish members. This is due chiefly to the low voter turnout in the Arab sector and the split in the Arab lists, which resulted in Balad not clearing the electoral threshold. But this is only part of the story. Another reason for the all-time low in Arab representation in the Knesset is that there are no Arab MKs from the other "general" parties. The 20th Knesset (elected in 2015), for example, included four Arab MKs—in Labor, Yisrael Beitenu, the Likud, and Meretz. Last year (24th Knesset), there were five MKs from these parties- two in Meretz and one each in Yisrael Beitenu, the Likud, and Labor. This time there will be only the veteran Druze MK Hamad Amar (Yisrael Beitenu), who made it into the new Knesset at the last moment, thanks to the double-envelope ballots.

The average age of the members of the 25th Knesset is 50.5 The oldest are Haim Katz (75), Netanyahu (73), and Micky Levy and Yitzhak Goldknopf (71). There are 12 MKs under the age of 40. The youngest are Yitzhak Vaserlauf (30), Yorai Lahav (34), and Almog Cohen (35). The oldest faction is United Torah Judaism (its members averaging age 64); the youngest is Religious Zionism (its members averaging slightly under 48).

More than a quarter of the MKs hold law degrees, but only some of them actually practiced law before their election to the Knesset. These include Moshe Saada, Tali Gottlieb, Simcha Rotman, Karin Alharar, and Debby Biton. The 25th Knesset will have only a few members with a background in the media: veterans Yair Lapid, Merav Michaeli, and Yisrael Eichler will be joined by new recruit- Boaz Bismuth.