As the Central Elections Committee begins to debate disqualifying MK Hanin Zoabi and others from running for Knesset, IDI Senior Fellow Ami Ayalon writes that as distasteful as some of her words may be, banning Zoabi from running would be a victory for Israel's detractors. 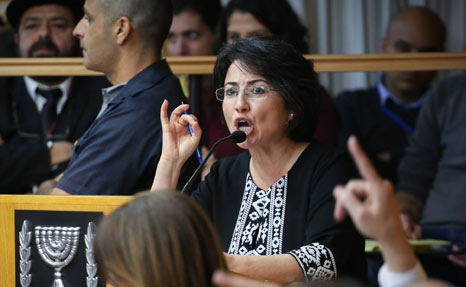 MK Hanin Zoabi provides a gauge for Israeli democracy in election season—a kind of litmus test of our capacity for provocative opinions that strain the limits of democratic discourse in Israel.

Zoabi does not believe in the Jewish and democratic Israel inspired by the Declaration of Independence and the rulings of the Supreme Court, and has never made any secret of her views. Her statements draw ire and her actions outrage. Her manner is thuggish, sullying many of the Arab citizens of Israel whom she claims to represent. Many Arab citizens oppose her positions and style, and struggle for their identity and rights with impressive restraint, which allows many of us Jewish Israelis to listen to them and amend our own views—albeit slowly.

I reject her positions and parliamentary work, but disqualifying her from running for the Knesset would be a grave mistake. I do not assert this on legal ground. Interpreting the Basic Law: Knesset is for the Supreme Court justices; I have no pretensions to advise on this.

My view derives from my beliefs about national security, built over 38 years of defending the country—almost five of them as Shin Bet director after the Rabin assassination. It is my conviction that removing Hanin Zoabi's parliamentary podium is liable to bring about radicalization and, eventually, increased violence among fringe elements of Israeli society.

Such groups, which support MK Zoabi's position, agitate openly and fiercely against the policy of Israel's governments, but within the democratic "rules of the game." The parliamentary podium is, for these groups, the last means to voice their protest. Bereft of it, some are liable to go to ground and resort to violence. They would see themselves as having no alternative.

Democracy is not a recipe for national suicide, but Israeli democracy is resilient enough to withstand provocations. MK Zoabi is not a threat to the State of Israel's security, and we must not be tempted to grant her such status. Doing so would attest not to the danger posed by MK Zoabi but to excessive hysteria and lack of self-confidence in Israeli democracy.

A September 1999 ruling by the High Court of Justice notes that "democracy fights terrorism with one hand tied, yet still it wins." This axiom applies just as nicely, I believe, to many other instances where a democratic country chooses not to exercise its full might against its adversaries. It makes this choice both because it is secure in its resilience and democratic path, and also because it understands that protest—however toxic—is far preferable when manifested verbally and not through violence.

Disqualifying MK Zoabi, as long as she does not take violent action nor advocate it, would harm Israeli democracy and its power to withstand its detractors. Such a disqualification could lead to violence in Israeli society and undermine the resilience and prestige of Israeli democracy. The decision already taken, to suspend MK Zoabi from Knesset proceedings, was a significant boon for her and a heavy blow to Israeli democracy. MK Zoabi must be denied such gains. In this struggle, Israeli democracy must not be defeated.

Ami Ayalon is a Senior Fellow and head of the Amnon Lipkin Shahak Project at the Israel Democracy Institute.

This article was originally published in the Jerusalem Post on February 12, 2015 and has been reprinted with permission.