On July 29, 2014, the Knesset Ethics Committee suspended MK Hanin Zoabi for six months for statements she made about the kidnapping and murder of three Jewish teenagers and about Operation Protective Edge. What is the role of this committee? Why did it sanction MK Zoabi so severely? IDI researcher Assaf Shapira provides background information. 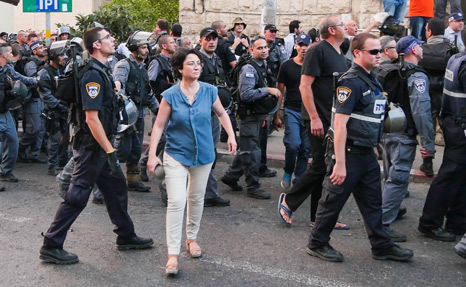 On July 29, 2014, the Knesset Ethics Committee voted to sanction MK Hanin Zoabi (Balad) severely for her statements about the kidnapping and murder of three Jewish teenagers in June and about Operation Protective Edge. These sanctions included a six-month ban on participating in Knesset plenum sessions and in meetings of Knesset committees. Below is background information that will help to understand these sanctions in context.

The Knesset Ethics Committee is unique in several ways, which include its legal status and its composition (the committee is comprised of only four MKs—two from the opposition and two from the coalition). The main difference between this committee and others, however, is in its purview: The Ethics Committee does not focus on legislation or on general debate; rather, it engages primarily in judging and punishing members of Knesset.For a general discussion of the Knesset Ethics Committee and the Rules of Ethics, see the Hebrew article "Ethics at the Knesset" by Assaf Shapira on the IDI Hebrew website.

In most cases, the Ethics Committee judges MKs when they are alleged to have breached the Knesset's Rules of Ethics, most of which are contained in a special chapter of the Knesset's Rules of Procedure. The Rules of Ethics impose many prohibitions on MKs, including a prohibition on conflicts of interest and promoting personal agendas, a prohibition on membership in various bodies and corporations, a prohibition on receiving various payments and benefits, a prohibition on repeated absence from Knesset plenary sessions. They also include an obligation to uphold “general values” such as loyalty to the fundamental values of the State of Israel, promoting the interests of the State of Israel, defending the Knesset's honor, and maintaining the public's confidence in the Knesset. As part of its work, the Ethics Committee often discusses extreme and disrespectful remarks made by members of Knesset, and must decide whether the speaker violated general values when making those comments.

The Knesset Ethics Committee devotes most of its time to addressing complaints submitted against MKs who have allegedly violated the Rules of Ethics. Any person can submit a complaint against an MK to the committee. After receiving a complaint, the committee can decide to reject it out of hand or to pursue the matter and summon the accused MK to a hearing.

If the Ethics Committee rules that an MK has indeed breached the Rules of Ethics, it is authorized to impose various sanctions on the MK. In ascending order of severity, these punishments, which are stipulated in sections 13D and 13E of Israel's Immunity Law, are as follows: citations and reprimands, denying the right to speak in the Knesset plenum and/or in meetings of Knesset committees, restrictions on various parliamentary activities (e.g., the submission of proposed legislation), and banning the MK from plenum and committee sessions. The committee, however, is not empowered to revoke an MK's right to vote. The committee may also decide to withhold the salary of an MK in response to absences from plenary sessions and violations of the restriction on additional employment while serving as a member of Knesset. Most of these punishments are limited in time; for example, a Knesset member may be banned from plenary sessions and committee meetings for a maximum period of six months. Any MK is entitled to appeal the committee's decision to the Knesset or to the Israeli High Court of Justice (depending upon the type of decision and the punishment that was imposed).

The Case of Hanin Zoabi

The current incident is not Hanin Zoabi's first run-in with the Knesset Ethics Committee. In the wake of her participation in the flotilla to Gaza in May 2010, a number of MKs and others petitioners submitted complaints against her to the Ethics Committee. In response to these complaints, the committee banned Zoabi from plenum sessions and committee meetings until the end of the parliamentary session, which was a period of just two weeks. This was due to mitigating circumstances in her favor; for example, there was a lack of evidence that MK Zoabi knew about the violence planned against IDF soldiers and there was no evidence that she herself engaged in violence.See the Decision of the Knesset Ethics Committee, July 18, 2011 [Hebrew]

In the current situation, complaints were submitted, as noted, following MK Zoabi's statements about the murder of three Jewish teenagers and Operation Protective Edge.See the Decision of the Knesset Ethics Committee, July 29, 2014 [Hebrew] These complaints were submitted by Knesset Speaker Yoel (Yuli) Edelstein and other members of Knesset, by organizations such as Ometz and the Legal Forum for the Land of Israel, and by individual citizens. It is interesting to note that some of the complaints demanded that the committee take action that oversteps its authority, such as ousting Zoabi from the Knesset or revoking her immunity and placing her on trial. The possibility of imposing such punishments was removed when the Attorney General decided not to initiate a criminal investigation of Zoabi in the cases at hand (although he did order an investigation to be launched in a different case, in which Zoabi was suspected of inciting violence and of insulting a public employee during a clash with police officers at the Nazareth Magistrate's Court). The Attorney General, however, emphasized that his finding that Zoabi did not commit criminal offenses in these cases does not eliminate the possibility that she is indeed guilty of serious ethical misconduct.

In response to the complaints against her, Zoabi argued that she "represents a vision of justice, liberty, equality, and an uncompromising fight against racism, oppression, discrimination, dispossession and denial of rights."Ibid. She also accused the complainants of racism. The committee recognized the importance of freedom of speech and parliamentary oversight of the government and the army (even during wartime), but argued that Zoabi's remarks do not fall within the bounds of legitimate criticism. In particular, it addressed Zoabi's assertion that the murderers of the three teens are not terrorists and her call for a Palestinian popular resistance against Israel and for discontinuing cooperation with Israel.

According to the committee, in making the statements that she made, Zoabi failed to honor two general obligations imposed on MKs: first, she acted in a way that was detrimental to the state's welfare; secondly, she weakened the public's confidence in the Knesset and damaged its image. In contrast to the flotilla case, this time Zoabi did not have mitigating circumstances; on the contrary, the Ethics Committee viewed her breaches of the Rules of Ethics as very egregious. For this reason, the committee decided to impose the maximum statutory punishment: a ban on participating in sessions of the Knesset plenum and Knesset committee meetings for a period of six months, during which Zoabi would only be allowed to enter for the purpose of voting.

The main role of the Knesset Ethics Committee is to judge MKs and impose punishments on them as necessary. Therefore, in its punishment of MK Zoabi, the committee fulfilled its primary objective. However, the power of the committee is limited and the committee's role of ensuring that MKs follow the Rules of Ethics for MKs is largely technical. Beyond the Knesset committee, MK Zoabi's statements should be discussed in broader arenas: not only the legal arena, which will deal with this issue because Zoabi has announced that she will petition the High Court of Justice against the decision, but also in the public arena, as part of a more general discussion of relations between Jewish and Arab citizens of the State of Israel.

Assaf Shapira is a member of the research team of IDI's Political Reform project.