In an op-ed published in The Jerusalem Post on September 13, 2012, IDI's Vice President of Research Prof. Yedidia Stern, who served on the Plesner Committee for Equality in National Service, and Jay Ruderman, President of the Ruderman Family Foundation, analyze the Haredi community's reluctance to serve in the Israeli army and present an approach that will facilitate the Haredi integration into Israel's army and society. 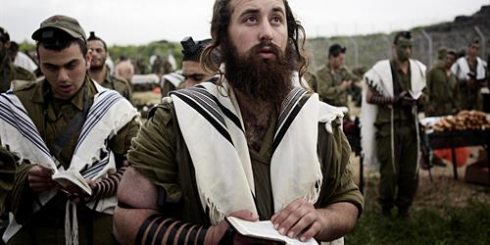 The most pressing social, political, and religious issue in Israel this year has been the question of Haredi service in the Israel Defense Forces (IDF). Although a wall-to-wall coalition was established to address this problem, a solution has yet to be found. Currently, unless a special legal arrangement is instituted, Haredim are to be drafted like all other Jews in Israel. If they are forced to serve, however, widespread civil disobedience is likely to emerge, further increasing the rift in society and possibly leading to a culture war. The most likely scenario is that the Knesset will try to arrive at a fair legal solution during its winter session. This will require addressing the needs of three distinct parties: the general public, which is demanding equal military service; the Haredim, who refuse to abandon their ethos of full-time Torah study for all; and the High Court of Justice, which will review every Knesset decision in this matter to determine whether it is sufficiently equitable.

Since Rosh Hashana marks a period of individual and national soul-searching, this is an appropriate time to look past the details and focus on the big picture: Why don't the Haredim serve in the IDF? Can we accept their justifications? And, how is a state, that is both Jewish and democratic, to deal with this crisis?

Let's start with the facts: The Haredi sector today accounts for about a tenth of Israel's population. Its growth rate is phenomenal—more than 5% annually, as compared with 1.8% for the general population, which can be seen from the fact that more than one quarter of Jewish first graders in Israel are Haredi. Obviously, any change in the nature of this sector will have a rapid and powerful effect on all Israeli society. Some 52,000 Haredi men have declared that Torah study is their sole occupation and therefore have not served in the army. Since the law prohibits them from working, only 42% of Haredi men are employed, as compared with 80% for the general population. The average income of a Haredi household (NIS 6,100) is about half of the income of other households, and the poverty rate in the Haredi sector is soaring to alarming heights (56%).

Experts including the Chair of the National Economic Council (a division of the Prime Minister's Office) have determined that the combination of accelerated growth and refusal to participate in the country's society and economy is a recipe for disaster that may lead to economic collapse and may damage national security, as a weakened economy will not be able to support Israel's security needs. This leads to the sobering conclusion that the realization of the Haredi ethos of full-time Torah study threatens the very survival of the Zionist enterprise.

Is this situation really necessary from a Haredi perspective? Not necessarily. Haredim in Israel explain that they have sequestered themselves in yeshivas in order to fulfill the commandment to study the Torah "day and night." Although they truly believe this explanation, it should not be accepted, as the Haredi community in Israel can be contrasted with a "control group" of ultra-Orthodox Jews in the United States and Europe. Many ultra-Orthodox Jews in the Diaspora conduct their lives differently from their Israeli counterparts. After several years of yeshiva study, during which they consolidate their ultra-Orthodox identity, they learn a trade, join the local labor force, and support a "society of learners"—a small group of scholars funded by the community. Moreover, even in pre-Holocaust Europe, the Torah world did not advocate collective seclusion in yeshivas; most ultra-Orthodox joined the marketplace of life and only a select few, the most learned of all, adopted full-time Torah study as a way of life.

Thus, paradoxically, in the Diaspora, the home of the "Old Jews" who were looked down upon by Zionism, Haredim chose to be productive and join the workforce, while in Israel, the birthplace of the "New Jews" who control their own destiny, Haredim isolate themselves and do not integrate into society and the economy. It seems, then, that there was some kind of internal connection between the establishment of the State of Israel and the change in the Haredi worldview, which now mandates a life of Torah study for all Haredi men. What is the nature of this connection?

The founders of political Zionism expected that the transition from an existence in spread out communities to one in a sovereign state would unify divided Jewish society and help it to form one clearly-defined national identity. In practice, however, the State of Israel did not solve the identity crisis; it intensified it. Although the state created a Jewish public sphere—comprising territory, politics, army, and law—control of that space has been the central conflict between Jews in our generation.

Ben-Gurion, for example, adopted the "melting pot" concept, and sought to imbue all Jews with a secular, nationalist, and socialist outlook. Religious Zionism, in contrast, wants to run the state in accordance with its religious vision of redemption, which shapes its positions on the borders of the state, its attitude toward the judicial system, and more. But while secular and religious Zionists wish to control the entire public sphere, the Haredim—at least so far—are interested only in their own small domain. In both Israel and the Diaspora, their efforts are directed at strengthening their own sector.

The nature of the challenge facing the Haredi community, however, varies with location. In the Diaspora, Haredim live in a non-Jewish state and society. Consequently, it is relatively easy for them to be "a Jew at home and a man on the street." In Israel, by contrast, their external environment is Jewish. Haredim, religious Jews, and secular Jews all share a common destiny, both in their internal Israeli existence (e.g., Israeli politics) and vis-à-vis external factors (e.g., enemy states). Paradoxically, this commonality among Jews is the greatest threat to Haredi identity in Israel.

The crux of the issue has nothing to do with Torah study but rather with apprehension about contact with Jews who have different identities. IDF conscription at a young age, for example, is liable to damage the unique identity of the next Haredi generation. The adrenalin of an 18-year-old Haredi runs as high as that of his secular counterpart: driving a tank, jumping out of a plane, and having unmediated contact with secular Jews in a pup tent is liable to change him. Thus, it is in the Jewish state, where Jews are the proprietors rather than visitors, that Haredim feel threatened and barricade themselves behind "walls of sanctity." In contrast, in other countries, where the threat is distant and Haredi identity is relatively secure, they function in the outside world.

This analysis yields guidelines for an appropriate solution. The majority of Israelis must recognize that the isolationism of the Haredi community does not stem from a desire to be parasites or exploitative, but from a real identity crisis. As a liberal state, Israel must respond to the needs of this culturally threatened minority and help it protect its identity. At the same time, however, the Haredi minority must realize that its isolationism endangers the future of the state and cannot continue indefinitely.

In the coming year, the Knesset will have to formulate a new legal arrangement that strikes a delicate balance. It must include the following: (1) The Jewish state must recognize the value of Torah study. Accordingly, a small, spiritual and intellectual elite must be permitted to live as a "society of learners," similar in size to parallel groups in the United States and Europe. (2) Most Haredi men must serve in the IDF. This will fulfill their obligation to the future of the Jewish state and will open the gates of employment to them, enabling them to join the workforce and save their community from its abject poverty. (3) The Haredim must be able to maintain their identity despite their army service. For this reason, the state should allow Haredim to be drafted at an older age—such as 22, when most are married with children—when their identities are firmly established. Similarly, they must be offered terms of service that will allow them to maintain their identity. Such service will be more costly and less efficient, but it is a necessary concession toward a minority group facing a crisis of identity. While full equality will not be achieved, the Haredim will join all other Jews in Israel both symbolically and in practice.

A version of this article was published in The Jerusalem Post on September 13, 2012.