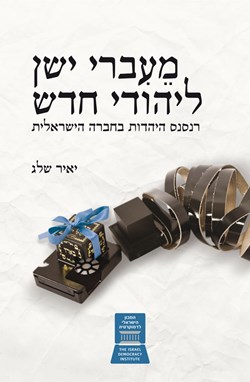 For the last two decades, Israel has witnessed a trend of renewed and intensive interest in Judaism. Evidence of this phenomenon can be found in Beit Midrash programs and study groups, secular prayer communities, the emergence of alternative Jewish wedding ceremonies, radio and television programs devoted to Jewish themes, newspaper columns devoted to the weekly Torah portion, contemporary singers performing new renditions of ancient liturgical texts, a renewed interest in the study of Kabala and Hassidism, and more.

Yair Sheleg's book The Jewish Renaissance in Israeli Society: The Emergence of a New Jew is a first attempt to map the different aspects of this unique phenomenon and to document their gradual and systematic development. A Senior Researcher at the Israel Democracy Institute, the author examined the expressions of this phenomenon in the Israeli educational system and in the Israel Defense Forces, its unique manifestations among immigrants from the former Soviet Union and veteran Mizrahi Israelis, and its emergence in the media and music industry. He interviewed social activists and researched how alternative medicine, therapeutic techniques, and even environmental activism are related to the Jewish renaissance in Israeli society.

Over the last two decades, a renewal of interest in Judaism has become increasingly conspicuous in Israeli society. This trend is evident both within secular groups, who formerly took no interest in Judaism, and within religious groups, who were obviously engaged with Judaism in the past, but whose engagement is notably different today than in previous generations, having become far more cultural and spiritual than halakhic (i.e., related to Jewish law).

Indications of this renewed interest are visible everywhere - in dozens of Jewish study centers and study groups that have sprung up throughout the country; in many newly established prayer communities that serve as substitutes for synagogues identified with various religious streams (this is due to the desire of some secular people to distinguish themselves not only from Orthodoxy but also from liberal religious groups, such as the Conservative and Reform movements); and in the rising number of organizations and individuals seeking secular alternatives to traditional Jewish ceremonies - mainly weddings, but also bar and bat-mitzvah ceremonies and birth and mourning rituals.

Other notable signs include increased media discourse about Judaism in general and the weekly Torah portion in particular; greater attention to traditional liturgical poems (piyyut), especially by secular musicians who are composing and performing age-old Jewish liturgical texts; and the burgeoning artistic interest in Jewish source material and in dialogue with God and Jewish tradition, which is especially noticeable in popular music, but is found in other fields as well.

This book, The Jewish Renaissance in Israeli Society: TheEmergence of a New Jew, sets out to explore all facets of this fascinating phenomenon. First, the book distinguishes between two main aspects: a cultural component, in which Jewish texts and tradition function as a cultural treasure meant to enhance the lives of those involved with it, and a spiritual component, with an emphasis on a religious quest for divine contact. Generally speaking, it appears that those drawn to the cultural component are mostly secular people, although some religious people are as well, while the spiritual component appeals more to the religious public. Thus, even those who define themselves as secular but manifest a revival of spiritual attraction to Judaism live, in many practical senses, as if they are religiously identified.

The book's first section focuses on the cultural component, and describes its process of expansion. This process begins with broadening the fields of involvement - moving from the study of Judaism, which is strictly intellectual, through the adoption of personal alternatives to Jewish traditions and texts, and finally to traditional prayer services conducted by people who continue to define themselves as secular.

The book goes on to describe the process' spread from small groups to the heart of the Israeli establishment. Everyone wants to connect with Judaism today: the education system, community centers, and the Israel Defense Forces; immigrants from the former Soviet Union, who were previously perceived as being exceedingly secular; and members of the Mizrahi community (Jews of North African and Middle Eastern descent), who have always had a traditional orientation but who, in recent decades, have demonstrated a desire to bequeath their heritage (whether their liturgy or their general approach to tradition), to all Jews in Israel. The desire to connect is also seen in mass culture, especially in the media and popular music, as well as in spheres that were previously considered irrelevant to Judaism, such as social action, environmental advocacy, alternative medicine, and spiritually oriented treatment methods that focus on the mind-body connection (e.g., meditation, martial arts, etc). A separate chapter in this section of the book deals with a specific variation of Jewish renaissance found among some religious Zionists, in which it is not involvement in Judaism that is enhanced but rather involvement with Jewish and general culture.

The second part of the book explores the spiritual component, first as part of the universal New Age phenomenon - a kind of individualistic, non-institutionalized spirituality that is based less on the fulfillment of obligations and more on techniques, as a means of connecting to a world that transcends reality. From this standpoint, the Jewish renaissance's spiritual aspect is in fact a Jewish variation of the New Age. In this context, Israelis forge links with Jewish spirituality in three main ways: by the study of Kabbalah, the renewed interest in Hasidism, and the influence of Far Eastern religions, with which many Israelis have come
into contact in recent years. Also discussed are practical expressions of Jewish spiritualism, especially in the field of music, as well as in a variety of treatment techniques.

The book examines the factors that have given rise to the Jewish renaissance, especially in recent decades, postulating that there is a discernible difference between the impetus behind the cultural renaissance and that of the religious renaissance. In other words, the cultural renaissance has been influenced more strongly by the intra-Israeli quest for an orientation anchored in values and identity, in the wake of the severe damage inflicted upon the society's previous anchors - Zionism and socialism. In contrast, the spiritual renaissance is influenced mainly by the universal quest for balance in the face of an alienated capitalistic world. Despite this distinction, it appears that both the local and the universal processes impact mutually on the phenomenon as a whole. At the same time, we can see the effect of secondary factors, such as the assassination of Prime Minister Yitzhak Rabin, the rise of Mizrahi culture and the model of identity that it generated, and the dawn of the new post-ideological era, which has facilitated, today more than ever, new and personal amalgams of identity.

The book's summation is concentrated in its two concluding chapters. The first chapter targets the obstacles and risks with which the Jewish renaissance must contend. The process is still striving to compete with the powerful attraction of mass consumer culture; thus, in effect, it largely remains the province of a cultural and social elite (particularly in the cultural realm). The economic crisis of 2008-2009 also had a strong impact, posing a serious problem of reduced funding for organizations that are involved in the renaissance process. On the other hand, the renaissance's spiritual component is facing the very real danger of a slide into fundamentalism.

The book closes with a second concluding chapter that focuses on the phenomenon's long-term social and cultural implications. In essence, it seems that the renaissance process intensifies the breaking of Israel's perpetual religious-secular dichotomy, which has always been problematic. On the other hand, it also contributes to the creation of an Israeli Judaism - a Jewish identity that typifies Jews residing in a sovereign Jewish state with a Jewish majority, whose official language is Hebrew and whose Jewishness is fully recognized in the public sphere.

The Jewish renaissance is turning Israeli Judaism into the heritage of both the religious and the secular. It has expropriated the negative aspects of Judaism (the prohibitions imposed on all Israeli Jews because of the Jewish identity of the state) and imbued them with positive aspects as well (e.g., study, prayer, etc). Clearly this process has great potential for diminishing the religious-secular schism. In this sense, it appears that many proponents of the Jewish renaissance are frankly opposed to the negative facets that formerly typified the conduct of the Jewish public sector, specifically the various compulsory religious prohibitions.

Their opposition stems from the fact that the new secular individualistic identity that is prepared to embrace traditional Jewish elements, is also an individualistic identity that will not tolerate external coercion. This is partly due to a sense that those who have incorporated Jewish elements into their identity do not need the religious establishment to define Jewish identity for them.