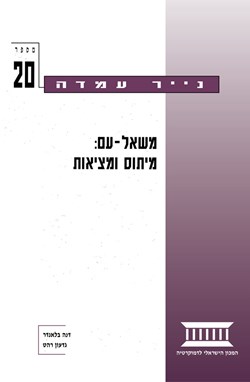 A policy paper that discusses whether a referendum is the best mechanism for deciding controversial issues in a democracy. Focusing on the use of a referendum to determine whether to approve a peace agreement with Syria that entails significant territorial compromise, the paper analyzes the options available for regulating the components of the referendum, discusses the referendum in the context of the democratic system in Israel and in the world, and explores possible alternatives to the referendum.

At first glance, a referendum might seem to be a desirable component of the democratic system. However, those who are concerned for the future of Israeli democracy, would do well to think again about the long-term ramifications of the referendum mechanism. As will be seen in this policy paper by Dana Blander and Gideon Rahat, when one examines the broader picture and considers the immediate and long-term ramifications, it becomes clear that the myth of the referendum masks a much more complex reality. Focusing on the use of a referendum in order to determine whether to approve a peace agreement with Syria that entails significant territorial compromise, this study analyzes the options available for regulating the different components of the referendum, discusses the referendum in the context of the democratic system in Israel and in the world, and presents possible alternatives to the referendum.

Readers of this position paper will be impressed by the imaginative way humans have invented methods for adopting public decisions through referendums. Dana Blander and Gidi Rahat have studied this phenomenon in depth and present a fascinating study. The miracle cure called the referendum proves to be just as problematic as other miracle cures.

Ever since Deputy Defense Minister Motta Gur announced from the Knesset podium in early 1994 that the government intended to hold a referendum on any future agreement entailing significant territorial compromise in the Golan Heights, the two sides have been preparing for battle. In the winter of 2000, these activities reached a new peak when Prime Minister Ehud Barak traveled to the U.S. to meet Syrian Foreign Minister A-Shara and President Clinton at a college in West Virginia, where intensive discussions on a peace agreement were held. The talks had barely begun before a fierce battle was mounted in Israel to convince citizens to say "yes to the Golan" and "no to Barak." The contestants in this battle for public opinion will undoubtedly find the energy, time and money to show up repeatedly at intersections and along the roadside in Israel if diplomatic efforts seem to be nearing a positive conclusion.

At first glance, a referendum might seem to be a desirable component of the democratic system. However, those who are concerned for the future of Israeli democracy, and not only its present, would do well to think again about the long-term ramifications of the referendum mechanism. If referendums are such a good thing, why bother maintaining other democratic institutions such as elections and a legislature? Some would reply that the referendum is vital in special cases, such as the ratification of international conventions - but if we are to include international conventions, why not also add an important accord between religious and secular Jews, between employers and employees, or between Jews and Arabs?

Each state establishes frameworks for decision-making. As a general rule, these frameworks should be respected. A referendum is certainly a possibility, and perhaps even desirable in exceptional cases. The rule to follow, however, is to avoid using this mechanism out of concern that it will impair governability and stability.

When one examines the broader picture and considers the immediate and long-term ramifications, it becomes clear that the myth of the referendum masks a much more complex reality. In any country, and certainly in the Israeli context, the ramifications of the referendum should be examined in terms of two interrelated fields: the political system and the social system. There is a danger that divisions will only worsen, since the referendum may create a precedent for addressing additional issues that divide the Israeli public. The all-out battle to convince segments of the public holding the balance in a referendum - in contrast to the interactions that take place through the rules of coalition politics - will have negative consequences, and may provoke those who those who are unable to change the decision through legal means into taking radical action.

Israel's political system already lacks sophisticated checks and balances; however, adopting the referendum as a constant or dominant feature will completely disrupt the equilibrium. The referendum will deal a further blow to Israel's parliamentary democracy. For all its faults, the parliamentary system is the system used in Israel, and the parliament is the framework in which we will continue to make the vast majority of decisions regarding our laws and our common life, now and in the future. We should seek ways to reinforce this system instead of weakening it through decisions designed to circumvent the Knesset. The introduction of direct elections for prime minister and the primaries as implemented in recent election campaigns are denuding the Knesset and the political parties of any real content. The political parties are being deprived of the capacity to mediate and integrate public demands.

It should also be emphasized that by holding a referendum, the legitimacy of the Knesset is impaired, even if the Knesset itself plays some role in preparing the referendum. The message is clear: A simple majority in the Knesset is not sufficient, and decisions of the Knesset and the government can be overturned in ways other than new elections. The sovereign body takes a decision against itself - yet not in a general and sweeping manner, but on a single specific issue.

The concept of the referendum is anti-parliamentary, symbolizing a surrender of the core of parliamentary democracy and political compromise. As a tool for clear-cut decisions, as opposed to a representative mechanism, the referendum leaves no room for intermediate positions. In this situation, the loser is eliminated and the winner takes all. The decision reached is not open to appeal.

The referendum is, perhaps, an appropriate tool for a generation of politicians (from all parties) who prefer to avoid involvement in controversial decisions, passing responsibility to others - usually the courts, and now the general public. It would be better to reach a tough decision, and let the policy stand the true test of elections.

To the citizens of a democratic state - particularly those with no prior experience of a referendum - this mechanism may seem to be the ultimate and most advanced form of democratic decision-making.

Those who view democracy as a system founded on the principles of popular sovereignty, political equality, public debate, and majority rule may consider the referendum to be the quintessential expression of these principles. In decisions made by referendum, the electorate can identify its mark more clearly than in decisions mediated through the sometimes distorted lenses of public representatives. This image of democracy revives, perhaps, the Greek polis, in which the citizen played a direct part in the political process. As the result of this perception of democracy as the direct and active government of the people, the referendum is considered the pinnacle of democratic aspirations, providing a solid and broad-based foundation of legitimacy for decisions made in this manner.

In the Israeli context, the proposal to adopt the referendum - which is currently being promoted in the context of a referendum to approve or reject a peace agreement with Syria - constitutes a further step in the adoption of the trappings of direct democracy. In the above-mentioned issue, citizens will now determine the decision by themselves, instead of electing those who will choose others to make key decisions, as was the case under the parliamentary system current in Israel until 1996, and instead of directly electing the central decision-maker, as is the case in presidential regimes and according to the new system of government introduced in Israel in 1996.

Given this perception of the referendum, it must be asked whether this mechanism is really the ultimate democratic tool. Do the decisions made in a referendum faithfully represent public opinion? Might interested parties not use this mechanism to meet their own needs, and recruit popular legitimacy by manipulating the associated procedures? In this position paper, we shall see that the mechanism of the referendum is indeed vulnerable to manipulation by interested parties. Moreover, the referendum includes various components that have ramifications on the expected results of the vote, even if these aspects are determined by a neutral body, in good faith, and for substantive and professional considerations. As in the case of another democratic mechanism, the electoral system, there is no way to guarantee that the referendum will constitute an absolutely faithful expression of the public's positions on the issue to be determined.

In this position paper we focus on the issue currently on the public agenda: the use of a referendum in order to determine whether to approve or reject a peace agreement with Syria entailing significant territorial compromise. We shall also briefly discuss the connection between the use of the referendum and the characteristics of democracy in general, and Israeli democracy in particular.

The position paper includes three sections. The first section will analyze the range of options available for regulating the different components of the referendum, discussing the possible impact of the use of these options in the Israeli context. Examples of referendums carried out in the democratic world will be noted in order to analyze the various components and illustrate their impact. The paper will also discuss these components as they are reflected in the law and in proposed legislation presented in Israel on this matter.