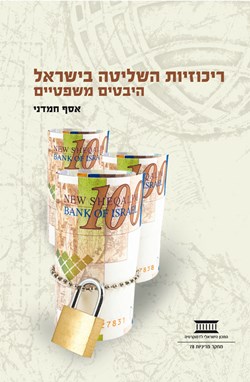 A policy paper that examines whether the Israeli legal system properly addresses the challenges created by the concentrated ownership of Israeli public companies. This issue not only underlies the regulation of the Israeli capital market, but also has potential implications for economic development and for the quality of government and democracy.

This policy paper examines whether the Israeli legal system properly addresses the challenges created by the concentrated ownership of Israeli public companies. This issue not only underlies the regulation of the Israeli capital market, but also has potential implications for economic development and for the quality of government and democracy. The study identifies two primary difficulties that must be addressed.

During the last months of 2008, the Israeli capital market experienced major swings as the world financial crisis deepened. These dramatic developments, including the significant losses suffered by pension funds, provident funds, and life insurance plans, highlighted the substantial influence that a small group of public companies' controlling shareholders have on the Israeli public's personal savings. This link is the result of two major developments that have taken place in recent years: privatization, that is, the transfer of control over key assets of the Israeli economy (such as Bezeq and Bank Hapoalim) from the State to private holders; and curtailing state intervention in pension savings plans, coupled with the redirecting of the public's personal savings to investment in the capital market. The first development intensified the influence of a group of controlling shareholders on Israel's economy, while the second intensified this influence on the savings of private citizens as well.

Second, it has become clear that this interdependence complicates any attempt to cope with the financial crisis. Thus, it was impossible to separate the calls for a safety net for pension savings from the fact that such a measure, which was ostensibly intended to protect those with pension plans, would indirectly help major holders of capital as well. At the same time, proposals to grant state guarantees as an incentive for institutional investors to purchase corporate bonds were met with resistance, based on the argument that this step would assist the "tycoons."

This policy study examines whether the Israeli legal system properly addresses the challenges created by the concentrated ownership of Israeli public companies. This issue not only underlies the regulation of the Israeli capital market, but also has potential implications for economic development and for the quality of government and democracy. The study identifies two primary difficulties that must be addressed.

At the level of the economy as a whole, control of the business sector by a relatively small group of families runs the risk of harming private investors, economic development, and even the quality of government and democracy. Hence, the State of Israel must formulate a comprehensive policy on the question of whether the concentration of control over the economy is a desirable phenomenon. If it determines that concentration of control should be discouraged, the government should adopt a range of legal and regulatory measures in a consistent fashion across regulatory areas to promote this objective.

There are two principal features of the ownership structure in Israel's capital market that distinguish it from the markets in the U.S. and Britain: first, the majority of public companies in Israel have a dominant shareholder that has the power to direct the corporation's affairs ("the controlling shareholder"). Second, a significant portion of these shareholders controls a relatively large number of public companies, primarily through pyramids. Consequently, the lion's share of economic and financial activity in Israel is controlled by a small number of families. Concentrated ownership at the level of the single corporation is not undesirable per se, as long as there are proper mechanisms for monitoring the controlling shareholder. With regard to control pyramids, however, the situation is different. Although we cannot state unequivocally that such pyramids are undesirable, there is cause for concern - as supported by studies from other countries - that control pyramids pose dangers to the capital market, the economy, and the quality of government.

The first part of this study deals with the question of whether the legal system in Israel is properly contending with the power of controlling shareholders. To answer this question, we must analyze the intrinsic difference between a market with dispersed ownership of corporations and one with concentrated control. The key challenge for corporate law in a market with dispersed ownership is the supervision of the management, given the fact that shareholders do not have the ability or the incentive to do so. In Israel's capital market, by contrast, the central challenge is to create mechanisms to monitor controlling shareholders. Firms' ownership structure also influences the effectiveness of the oversight mechanisms: in the case of a conflict of interests between shareholders and other investors in a corporation, the accepted tools for mitigating the principal-agent problem between management and shareholders are liable to achieve the opposite result.

In light of the essential differences between corporations with concentrated control and those with dispersed ownership, the study argues that Israeli corporate law offers only a partial response to the phenomenon of concentrated control in the capital market. The central difficulty in the current situation stems from the gap between the actual center of power and the focus of corporate regulation. While controlling shareholders have the ability to steer the corporation even if they do not formally serve as directors or officers, the corporate regulatory system focuses almost exclusively on those in official capacities. In certain areas, corporate law in Israel recognizes the power of the controlling shareholders and attempts to address it directly. In other areas, however, the judicial system ignores the fact that the controlling shareholders - rather than management - are the dominant figure in most corporations in Israel, and disregards the ramifications of this economic reality. Existing regulations concerning the role of directors and their duties do not provide an adequate response to the need to monitor controlling shareholders. For the most part, existing law overlooks the implications of the board's supervisory role for board composition, directors' duties, and the process of their appointment. In the legal sphere, uncertainty prevails concerning both the expectation that the directors will act as monitoring agents with respect to the controlling shareholders, and the directors' obligations to the private investors. At the market level, the appointment process of directors makes the entire board of directors dependent on the controlling shareholder, and does not grant representation on the board to public shareholders.

The study concludes with an examination of the treatment of the concentrated control of the economy as a whole. The State must formulate a comprehensive position on the question of whether it is necessary to act consistently to reduce the concentration of control. Assuming it decides to take steps to diminish concentrated control, this discussion indicates courses of action that are available to the State to achieve this objective. These measures include, inter alia, tax reform, the privatization of government companies, a general update of regulatory guidelines and policies regarding antitrust clearance, antitrust laws as a whole, and limitations on investment by institutional investors.