Yesh Atid, Zionist Camp and Meretz have the strongest online presence, while the Joint List and Yisrael Beiteinu lag behind.

Among the parties, Yesh Atid has the greatest online presence, with an average post generating 590 reactions. Next, Meretz weighs in with 587 interactions on average. In third place, the Zionist Camp's official party page generates an average of 572 responses per post. At the bottom of the online party page engagement list are Yisrael Beiteinu, whose posts lead to a mere 16 reactions on average, and the Joint List, which does even worse with only 11 responses.

It should be noted that the Zionist Camp actually has the highest party page engagement rate according to this study, with an average post leading to 671 online responses. However, the methodology behind this study was based on the highest number of online followers.  The Zionist Camp's online engagement rates were analyzed based on this criterion (similar to the approach taken with the Jewish Home and Joint List party pages). 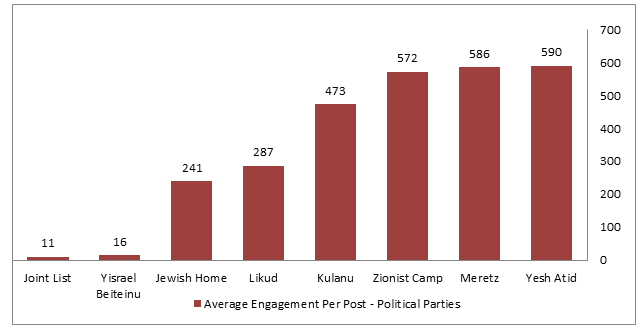 With regards to the amount of posts uploaded during the period in which this study was conducted, the Likud tops the list with 474 posts published, followed by the Zionist Camp with 125, Meretz with 116 and Yesh Atid with 95. Bringing up the rear are the Jewish Home party page, which only posted five times and Yisrael Beiteinu, with 51 posts published. In addition, the party that has the largest online following is Meretz, while Yisrael Beiteinu has the least with only 5,200 followers.

* This study does not include the Shas and United Torah Judaism parties, as they do not have official Facebook pages.