New IDI survey finds that 250,000 Israelis, who are not working, and not receiving unemployment allowances, might soon be forced to rely on supplemental income support. 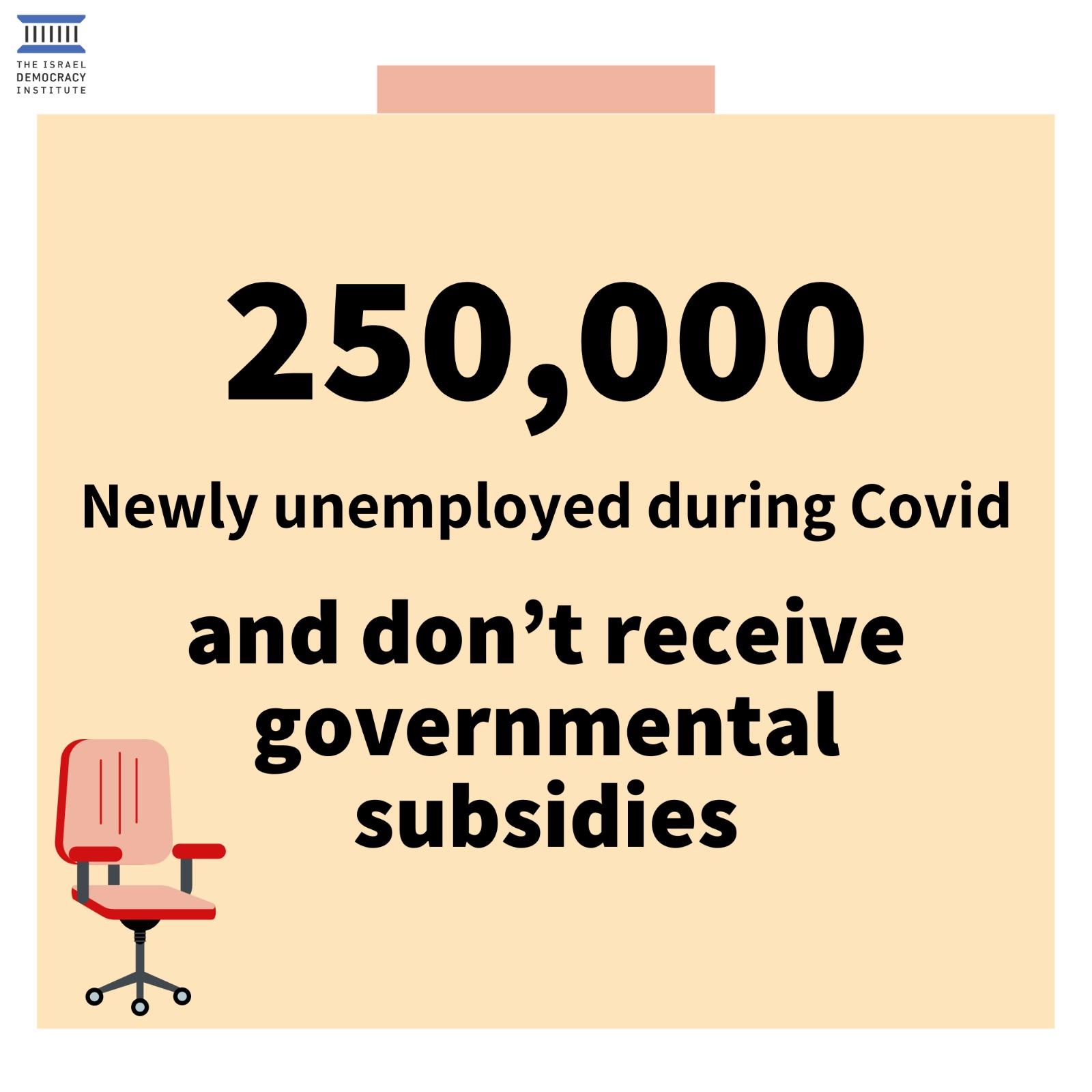 The goal of this report is to provide decision-makers in government, in the private sector, and in civil society with an up-to-date picture of the characteristics and preferences of individuals not working due to the pandemic (those who are currently not employed but were working when the pandemic began, or completed military service or studies since the outbreak of the pandemic), including information about their sources of income, the reasons they have not returned to work, and more.

Our unique data base includes data which is not published by the Central Bureau of Statistics (CBS), and so--will among other things, enable government decision-makers to identify the populations left without income and who are at risk of becoming dependent on income support payments, and to assess the size of these populations. In addition, this report can provide answers to at least some of the current questions about the labor market, and particularly the question of why some of these people have yet to return to employment, despite the relatively large number of available jobs.

Data was taken from a survey of Israelis out of work due to the pandemic, December 2021–January 2022The researchers involved in formulating and analyzing the full survey, which provides a picture of people who were working before the pandemic and are not currently working, included Prof. Karnit Flug, Daphna Aviram-Nitzan, and Yarden Kedar. Methodological consulting was provided by the Viterbi Family Center for Public Opinion and Policy Research at the Israel Democracy Institute.

We hope that the survey data will assist in formulating appropriate evidence-based policy.

The percentage of people not working due to the pandemic who are receiving unemployment benefit payments, which stood at 71% in December 2020, has gradually declined to 16% at the beginning of 2022 (and to just 10% among those aged 18–44).

Meanwhile, the percentage of people not working due to the pandemic who have not received any benefit payment from the state (including unemployment allowances) stood at 69% at the beginning of 2022, constituting some 250,000 people, compared with 16% in December 2020.

This situation should raise concerns among policymakers, as there is a danger that these 250,000 Israelis who are not working and not receiving unemployment allowances will soon be forced to rely on income support, in the absence of any alternative. It should be remembered that these are people who were working when the pandemic began or entered the labor market in the interim. That is, without the pandemic, there is a strong possibility that they would have continued working or begun to work.

This is a relatively vulnerable population segment, comprising a higher ratio of younger people, women, Arabs and coming from low-income households.The breakdown by income was carried out using the household situation immediately prior to the pandemic (when respondents were still in employment).

The large majority of those not in work (82%) declared that they are interested in working. Most are actively looking for work (around 63% of respondents), but a large share of these, are waiting for a job that meets their expectations (42% of all respondents), and only 21% are not waiting for such a job. Meanwhile, 19% are interested in working but are not actively looking for work.

Around half of those who are not working and are interested in working want to work in the same field in which they were employed previously.

Only a minority of those not working (18%) said that they are not at all interested in returning to work. Of these, the majority (58% of them) will not necessarily be persuaded to return to work even if they are offered a job that meets their expectations. Around one-half (48%) have a relatively low-income profile—up to NIS 10,000 per month in household income.

What will attract people not working to return to work? A high salary, certainly, as cited by 60% of respondents. At the same time, a similar share (54%) noted flexibility in hours as a factor that would entice them to go back to work, while 46% referred to having an interesting position.

In conclusion, though many people have been left without unemployment benefits and/or other benefit payments and have been forced to rely on family or on savings and loans for income, they are not in a hurry to return to employment, and are waiting for attractive job offers, for interesting positions, and for flexible hours, or are interested in switching to a new kind of job or different field of employment.

Reasons for currently not working 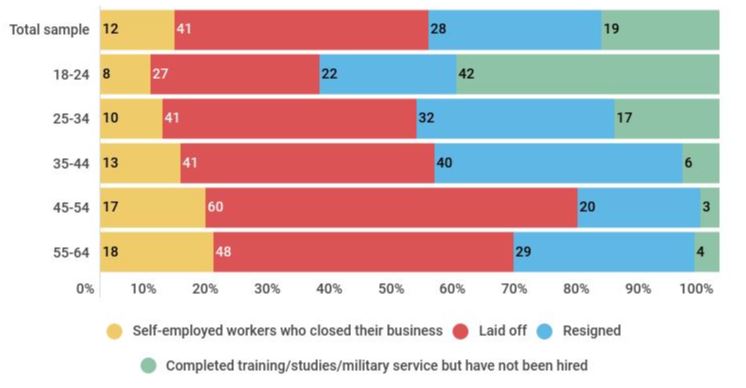 Unemployment Benefit Recipients—Now and Throughout the PandemicDue to the changes made to the survey questionnaires over time, it is not possible to perform a retroactive comparison for recipients of other benefit payments apart from unemployment benefit. For a similar reason, self-employed workers who closed their business have also been excluded from this analysis.

Surveys conducted by the Israel Democracy Institute since the outbreak of COVID-19 show that the proportion of people out of work due to the pandemic who receive unemployment benefit payments has declined steadily—from between 71% and 73% during 2020, to 53% in April 2021, 42% in August 2021, 28% in November 2021, and (as stated) to the nadir of just 16% in the current survey.

This steep decline reflects the government’s cancellation of furlough payments as well as the recovery of the economy, which has led to a fall in the absolute number of people out of work. However, this low proportion of unemployment benefit recipients threatens to be problematic, as it may force those who remain out of work to begin claiming other benefits, and primarily income support.

Unemployment benefit recipients throughout the pandemic, aged 18–64 (% of people not working due to the pandemic)

*Not including self-employed workers who closed their business; from August 2021, including people who completed military service, academic studies, or vocational training during the pandemic and did not enter employment

The survey was conducted at the end of December 2021 and the beginning of January 2022Responses were gathered by the iPanel survey company between December 30, 2021 and January 10, 2022., as the Omicron variant was spreading in Israel and driving the country’s fifth COVID wave. The survey sample consisted of a representative sample of the population of “people not working due to the pandemic,” that is, people who were not working at the time the survey was conducted (unemployed or not in the workforce), but who were working when the pandemic began or were due to enter the labor market in the interim (such as soldiers who completed their mandatory military service or students who completed their studies or training).

The survey sample comprised a total of 301 respondents, a representative sample of the population described above, which included some 395,000 people as of the end of 2021.

Of the survey respondents, 41% were former employees who had been laid off from their place of work, 28% had resigned from work, 12% were business owners or self-employed workers who had closed their business, and 19% had completed military service, vocational training, or academic studies during the pandemic but were not currently working.

Tags:
Coronavirus,
The Labor Market,
Healthcare,
Future of the Workforce,
Center for Governance and the Economy