On August 6, 2014, IDI brought together dozens of Jewish and Arab thinkers and leaders at an emergency meeting convened to address the sharp escalation of tension between Jews and Arabs in Israel and to lay the foundation for coexistence and mutual understanding between Jewish and Arab citizens. The document below was an outgrowth of that meeting and was published in the Hebrew press on August 19, 2014. An English translation and list of signatories follows.

We gathered together, Jews and Arabs, religious and secular, citizens of the State of Israel who are worried by the phenomenon of racism that has intensified in recent days. Despite our differences of nationality, gender, and political views, we declare the following:

The equal right of all people to life, liberty, and human dignity is the foundation of democracy. There can be no democracy without equal rights for all citizens. Civil rights—for Arabs and Jews—are not conditional (and may not be predicated on certain positions or feelings about the state or government policy).

For this reason, notwithstanding our complex and varied identities, we share a common abhorrence of the expressions of violence and racist statements and acts that we have witnessed in recent weeks, particularly against Israel's Arab citizens. These manifestations of racism demand strong and immediate action to curb the phenomenon.

Therefore, we call on all authorities, especially the Prime Minister of Israel, the Minister of Education, and the Minister of Justice, to place their offices at the forefront of the campaign against racism and to condemn expressions of racism unequivocally.

Similarly, we call on the Attorney General to order Israel's law enforcement agencies to take decisive action against racist acts and racist incitement, which has real potential to lead to violent or discriminatory behavior.

We, the undersigned, hereby undertake to work to strengthen these values, condemn manifestations of racism, and take steps to achieve equal citizenship. 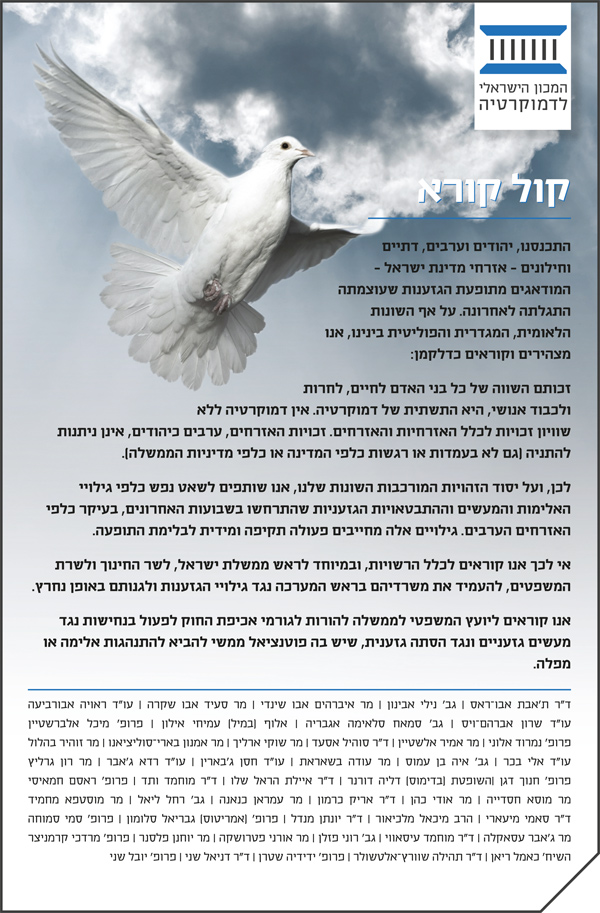