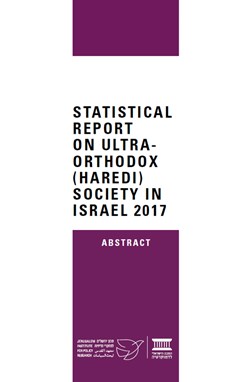 The 2017 Statistical Report on Ultra-Orthodox (Haredi) Society in Israel brings to light many significant changes and trends among the ultra-Orthodox community, including with regard to its participation in academic studies and information on employment conditions.

The ultra-Orthodox (Haredi) community in Israel has chosen to erect "walls of sanctity" to separate itself from mainstream Israeli society. This segregation by choice extends far beyond the beliefs and opinions unique to this community, and encompasses almost every sphere of life. Segregation is expressed in residential patterns (living in separate neighborhoods), in education (separate educational streams), symbolically, (distinct dress and customs), in cultural life (literature and media unique to the ultra-Orthodox community), in a separate organizational structure, and in the area of political leadership.

For many years, Israeli society's response to the Haredi desire for separation was indifference and alienation, with only rare peeks beyond the "walls". The Haredi community was in effect absolved of the responsibilities and obligations shared by other Israeli citizens, this in turn- reinforcing its isolation.

The 2016 Statistical Report was a major breakthrough in the study of the community, inasmuch as this was the first time that a wealth of comprehensive data on diverse aspects of the ultra-Orthodox community became available.

We are happy to present the 2017 Statistical Report on Ultra-Orthodox (Haredi) Society in Israel which both updates the 2016 report and brings to light many significant changes and trends among the ultra-Orthodox community, including with regard to its participation in academic studies and information on employment conditions.

The 2017 report presents updated data on important areas, for example voting patterns in Knesset elections; the ultra- Orthodox educational system; employment trends; the prevalence of poverty, and the community's standard of living and lifestyles. The report presents up to date information side by side with data from the past, to enable the reader not only to learn about the current situation in these areas, but also be able to compare it with the past and gain insight on trends towards change over time.

The report continues to be a primary source of information for policy makers, researchers, and the media, and no less so—for members of the ultra-Orthodox community itself.

Information on the methodology, definitions of terminology, and the complete data set which served as the basis for the report appear on the websites of the Israel Democracy Institute and the Jerusalem Institute for Policy Research.

We wish to express our sincere gratitude to the Russel Berrie Foundation and to the UJA Federation of New York for their generosity and partnership . Dr. Lee Cahaner, Dr. Gilad Malach, Dr. Maya Choshen

Tags:
The Ultra-Orthodox in Israel,
Center for Religion, Nation and State