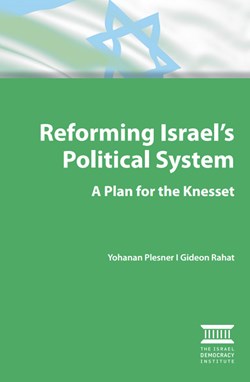 Reforming Israel's Political System: A Plan for the Knesset

An English adaptation of Hebrew policy recommendations on political reform distributed to Israeli decision makers in the period leading up to the elections for the 20th Knesset in 2015.

This booklet by IDI President Yohanan Plesner and IDI Senior Fellow Prof. Gidi Rahat is an English adaptation of a set of Hebrew policy recommendations distributed to Israeli decision makers in the period leading up to the elections for the 20th Knesset in 2015.

The recommendations are based on a comprehensive set of proposals for electoral reform in Israel developed on the basis of research conducted by IDI's political reform research team from 2009 to the present and on the deliberations of IDI's Forum for Political Reform in Israel, which was headed by Justice Meir Shamgar. The full set of recommendations can be found in Reforming Israel’s Political System, edited by Gideon Rahat, Shlomit Barnea, Chen Friedberg, and Ofer Kenig, which was published in 2013 by the Israel Democracy Institute and Am Oved (Hebrew).

Since implementation of the full set of necessary reforms will take many years, IDI isolated a more specific series of changes that could have far-reaching implications for Israeli governance and pave the way for further reform. The reforms described at the beginning of the booklet pertain to the procedures by which governments are formed and dissolved. These measures, in conjunction with changes to the electoral system and party structure that are presented later in the booklet, are designed to promote stability and improve governance.

Three changes in the way that governments are formed and brought down in Israel are proposed:

Since these measures may result in the formation of minority governments, it is important to include a number of safety valves that will protect against a political impasse, in which a stable government is incapable of governing. We recommend retaining the following mechanisms to prevent political deadlock:

These proposals offer a potent remedy for governmental instability in Israel. Future governments will be formed immediately following an election by the head of the largest faction, who will not require a parliamentary vote of investiture in order to establish his/her government. The parliament will retain its power to topple the government, but only by offering a constructive alternative supported by an absolute majority of Knesset members. The opposition will no longer be able to hold the government hostage to annual budget approval processes, and small parties will lose much of their power to extort concessions from the ruling party in the aftermath of an election. Future prime ministers, freed of the political sword of Damocles hanging over their head, will be able to build stable coalitions and formulate and implement policies designed to further the national interest.

Yohanan Plesner is the President of the Israel Democracy Institute and a former Member of Knesset.

Prof. Gideon Rahat is a Senior Fellow at the Israel Democracy Institute and Director of IDI's Political Reform Program. He is a member of the faculty of the Political Science Department at the Hebrew University of Jerusalem and is an expert on Israeli politics and comparative politics.