In the wake of the break-down in Arab-Jewish relations in Israel following Operation Protective Edge, IDI Research Fellow Yair Sheleg outlines four steps that can allay fears, contribute to dialogue, combat hatred, and improve relations between the two peoples. 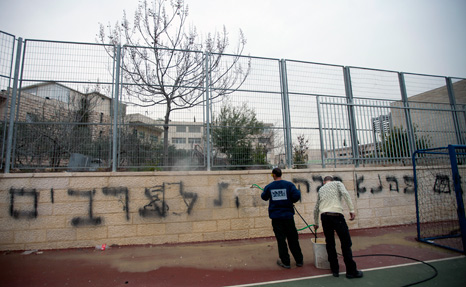 The past few months—from the kidnapping of the three Jewish teens in Gush Etzion through Operation Protective Edge—have been very difficult for relations between Jews and Arabs in Israel. Young Jews burned Mohammed Abu Khdeir of Beit Hanina to death; others beat up or cursed Arabs pedestrians, or rejoiced in the death of Gaza residents. On the other side, there were serious incidents in which Arabs have thrown rocks at cars driven by Jews in Arab areas and have hurled Molotov cocktails at Jewish homes in Jerusalem's seam zone; throughout social media, we have also seen Arab citizens rejoicing when Israeli soldiers died in combat.

The already tenuous relationship between Jews and Arabs has thus been put to the test once again. This is, first and foremost, a human issue of the first order—an issue concerning appropriate relations between people who live side by side. But it also raises an important practical and political issue: At a time when countries across the Middle East are collapsing to their ethnic and tribal foundations, there is no guarantee that the State of Israel will be immune from the infiltration of a similar process. This type of process is dangerous for both peoples, for the Arab minority and the Jewish majority alike.

The question of how to combat these outbursts of hatred is a critical question. Precisely for this reason, it is important to combat these outbursts with intelligence and sensitivity, since some methods of trying to contain them may exacerbate the problem rather than reducing it. Thus, for example, labeling broad sectors such as religious Zionists or "settlers" as "racist" might alienate members of those groups from the effort, though most members of those groups do not hold racist views. Although it is natural to analyze events and processes through the lens of the behavior of individuals, it would be better to focus on the fight against hatred and racism as phenomena, rather than labeling individuals as racist and waging a battle against them. The fight against racism is not the purview of a small group of prominent leftists while the rest of society is racist. To see the world in these terms is both unwise and incorrect.

Anyone who understands that it is not appropriate to characterize Israel's entire Arab population as afflicted with racism based on the actions of the extremists in their midst should apply this same reasoning to Israel's Jewish population and its sub-sectors, including religious Zionists and settlers. Of course, the opposite is also true: Every Jew who opposes the sweeping generalization that sees all of Israeli society / the right / the religious Zionist community / or the settlers as racist, should apply similar caution when speaking about Israel's Arab public.

The fight against hatred and racism should permeate all aspects of Israeli society: In speeches by the president, prime minister, and government ministers; in the education system, law enforcement, media, and marketing campaigns, and in any other way relevant. However, it must be clear that all this is merely treating the symptoms and not the cause. For years, the left camp has claimed, largely with good reason, that it is not enough to fight Palestinian terrorism, but we also need to find a solution for the future of millions of Palestinians who lost their homes or their status in the wake of the establishment of the State of Israel.

In the same vein, it may be said today that it is essential to fight hatred and racism, but it is certainly not sufficient. We must also drain the swamp in which racism breeds. In my opinion, the essence of this swamp is the Jewish public's intense fear for its future, both the future of its physical security, which has been threatened by Arab hostility since the beginning of Zionism, and the future character of the State of Israel as a Jewish state.

Some people in Israel and abroad have a dismissive or even contemptuous attitude toward this fear. They invoke Israel's enormous military might, including its reported nuclear weapons, as evidence that this fear is unfounded and perhaps even deliberately inflated by a manipulative leadership. This view is very misguided. First, even if the fear is not realistic, it should be taken seriously and efforts should be made to try to dispel it. Second, the fact that Israel probably has nuclear weapons does not help the individual Israeli who is being threatened on a daily basis by terrorist attacks, rockets, mortar fire, or other "primitive" weapons. Third, anyone who looks at the regional map, even briefly, will see that while Israel may be a "Goliath” in the conflict with the Palestinians, it is certainly far from it in the context of the Muslim world that surrounds it, and we have seen in recent days how non-Muslim minorities are treated in the Middle East.

In this context, the threat of losing Israel's character as a Jewish state is also seen not only as a matter of values and identity but as an existential threat as well. In light of this, the insistence on enacting Basic Laws that would anchor the status of Israel as a Jewish nation state that has been found in right-wing circles and part of the political center is understandable. On the other hand, of course, Arab hate crimes are expressions of fear on the Arab side, both for the fate of their people outside the borders of Israel and for their own future within Israel.

This, incidentally, is why I think it is better to define the serious incidents that we have witnessed not as expressions of "racism" but rather as "hatred," "incitement," and "hate crimes." "Racism" conjures up associations of feelings of racial superiority to an inferior race or hated people, as evidenced by the attitude of the Nazis towards the Jews and of whites toward blacks in the United States in the 19th century and South Africa in the 20th. But Jews who beat an Arab passersby, or even those who issue religious rulings that Jews cannot sell their apartments to Arabs, do not do so because they believe that Arabs are inferior, just as Arabs who harm Jews do not believe that Jews are inferior; rather, these acts are an expression of the national conflict and of the accompanying hatred that, unfortunately, are becoming increasingly more extreme. To be clear, my argument that the issue at hand is hatred rather than racism is not an attempt to minimize the severity of the problem; rather, it is an attempt to define the situation more precisely, so that the fight against this phenomenon will become more accurate and effective.

If this assessment is correct, and the expressions of hatred and the hate crimes that we experienced in recent months indeed stemmed from fear, we must add four steps to the legal battle, the educational battle, and the public battle that are the primary means of combating this mutual fear.

Step One: Adopt Basic Law: Israel as a Jewish and Democratic State

The phrase "Jewish and democratic state" entered Israeli public discourse in 1992, with the adoption of Basic Law: Human Dignity and Liberty, and has since become an essential part of the self-definition of Israeli society. The problem is that this concept has never been given a legally binding definition in Israeli law, whether in the law that was passed 22 years ago or any time since. The result is intensification of the double fear of Jews and Arabs in Israel: The Arabs are concerned that the term "Jewish state" may be used to deprive them of their civil rights, while Jews (at least some) are concerned that the term "democratic state" may detract from Israel's character as a Jewish state. A clear legal definition of this concept is therefore necessary, in the spirit of Israel's Declaration of Independence. This definition will determine that "Jewish state" means the nation state of the Jewish people, while “democratic state” means that all citizens of the state will have full equality. While this step alone, of course, will not dispel the mutual fear, it certainly can help to allay it. As proof, we see that even in the difficult climate that has existed between Arabs and Jews in recent years, some 70% of Israeli Arabs indicated in several surveys that they would be prepared to accept the term "Jewish state" if they were to be guaranteed that their equal rights would not be violated.

One factor that stirs up hatred and fear is alienation. Jews and Arabs rarely meet face to face, and when they do the encounters are often asymmetrical with the Arabs serving as "service providers" for the Jews, and certainly do not include direct discussion about the Arab-Israeli conflict. As a result, members of each community base their knowledge of the positions of the "other side" primarily on the media, which tends to emphasize the voices of extremists in order to boost ratings. For this reason, there is a need for a national project, preferably under the auspices of the President of Israel, that will bring together Jews and Arabs at all levels: in schools, universities, civil society organizations, community centers, regional councils, and any other relevant framework.

Israel is the state of the Jewish people and should remain so. This fact, however, results in alienation of the non-Jewish citizens of Israel. Therefore, while preserving Israel's character as the Jewish nation state, it is important to strengthen civil aspects of life that pertain to all Israelis. There must not only be unequivocal insistence on equal rights and conditions for all citizens, but also a concerted effort to integrate Arab citizens in all areas of life: politics, culture, sports, media, the economy, and other spheres. At the same time, we must create initiatives for cooperation between all citizens in civil areas such as the environment, health, and welfare. One way of giving symbolic expression to the shared Israeli civil identity would be the creation of "Israeli Citizens Day," on which ID cards will be issued to new citizens and to 16 year olds who are getting their IDs for the first time. Such a day could be a "peak day" in the Jewish-Arab encounters project described above.

Step Four: Insist that the Arab community participate in the fight against hatred and terrorism, directed against both sides

Although it is natural to expect the Jewish majority to bear more responsibility in this area, the Arab minority cannot be exempt from active involvement in combating hatred. Ultimately, if the Jewish majority finds that violence in the Arab street or even attacks against Israel by external Arab enemies is met with silence (or receives condemnations from only a few lone voices), it will not see this silence as an understandable phenomenon related to the Arab community's minority status, but rather as tacit approval of attacks against Israel and Israelis. Such silence will also deal a fatal blow to Jewish motivation to fight against anti-Arab hate crimes. Accordingly, it is certainly justified to demand that all Arab citizens who do not want the ongoing state of hostility and hatred to continue must speak out not only against Jewish attacks against Arabs but also against Arab attacks against Jews, just as criticism about violence in both directions would be expected from any decent Jewish person.

The steps described above, of course, do not obviate the need for state authorities to respond to manifestations of hatred and incitement in a direct and resolute manner. But without these or similar measures, it is difficult to believe that the fight against hatred and incitement will succeed.

A version of this article was published in The Jewish Week as "Four Steps to Combat Arab-Jewish Hatred" on November 18, 2014.