On November 21 2013, Prof. Yedidia Z. Stern appeared at a hearing of the Knesset's Shaked Committee on Haredi enlistment and argued that criminal sanctions are not recommended for reaching ultra-Orthodox conscription goals. In an op-ed originally published in Makor Rishon, he explains why. 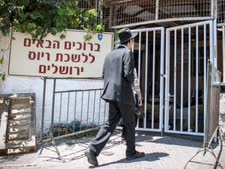 The issue of a more equal share of the burden of military service was at the heart of the election campaign for the current Knesset. The current coalition—which is devoid of ultra-Orthodox parties and rests on an alliance between "brothers" Naftali Bennett and Yair Lapid—was tailor made to enable the passage of legislation that would redress the serious inequality in which a large sector of society receives mass deferrals of enlistment. Indeed, it would appear that the historical moment is ripe for a civil covenant between Jews in Israel on joint sharing of the burden of sovereignty.

Where do things stand now? During the last few weeks, the Government bill drafted by the Peri Committee, which passed its first reading, has been debated by a committee headed by MK Ayelet Shaked, in preparation for its passage into law. While the ultra-Orthodox stayed away from the meetings of the Peri Committee and the Plesner Committee that preceded it, representatives of this community have been participating actively and regularly in the Shaked Committee's deliberations. This bolsters the legitimacy of the proceedings and adds to their complexity. This past week, a record number of 16 Knesset members attended a stormy session. It is clear to everyone that the time for a decision has come.

The members of the Shaked Committee have agreed that most of the ultra-Orthodox must bear the burden of military service. They have agreed that the age of service will be postponed to age 21 or 22. Similarly, a significant number of Haredi men who are eligible for the draft—up to 1,800 in each cohort—will be allowed to continue their Torah study, under the rubric of "Torah study is their service." The big question that remains is: what means should be used to reach this objective?

Two proposals are being considered. Yesh Atid's proposal, put forward by MK Ofer Shelah, would threaten the Haredim with criminal sanctions if recruitment goals are not met within a certain period of time. Habayit Hayehudi's proposal, promoted by MK Ayelet Shaked, would encourage enlistment by means of a variety of positive and negative economic incentives. This difference may appear to be a technical dispute, since there is consensus regarding the ultimate goal of the law. However, in practice, it could dissolve the alliance of "brothers" between Lapid and Bennett and could undermine the unity of the coalition government, as both camps have dug in and are defending their positions with all their might.

Who is right? Ayelet Shaked or Ofer Shelah? Habayit Hayehudi or Yesh Atid?

The leading experts on Haredi society, sociologists who have devoted many years to analyzing the ultra-Orthodox sector, believe that Haredim should not be threatened with criminal sanctions. Dr. Haim Zicherman and I have outlined a detailed framework for drafting the Haredim, which also prefers the economic route over the criminal route. In our opinion, the threat of mass imprisonment could trigger a "holy war" that would lead to civil disobedience. We have already been burned once in a similar situation. In 2010, the High Court ruled that Haredi parents in the city of Emmanuel who disobeyed a court order that they must send their daughters to a school that does not distinguish between Sephardi and Ashkenazi students should be imprisoned. Although most Haredim oppose this type of shameful school segregation, hundreds of thousands of ultra-Orthodox Jews demonstrated against the incarceration of their friends, until the State capitulated in the end. This disgraceful event may have been just a prelude, which would pale in comparison to the events that may follow in response to the future imprisonment of massive numbers of Haredim on the grounds that they have chosen a life of Torah study over military service.

It is likely that civil disobedience, or the fear of civil disobedience, will prevent criminal sanctions from being implemented even if they are enacted. This would turn the law into a dead letter, and would be a crushing blow to the rule of law that would have an extremely severe impact. It may turn out that the State of Israel is unable to implement its decisions regarding one of the most central issues of our national life.
The threat of mass incarceration in the future is likely to galvanize the ultra-Orthodox around the extremist guardians of the sector, as early as now. The pragmatic Haredi majority, under the leadership of Rabbi Aharon Leib Shteinman, will have to fall in line with those who oppose any compromise. The positive trends of integration of Haredim in the military and in higher education that we have begun to witness in recent times will be come to an end.

The conclusion is clear: brandishing the whip of criminal sanctions presents a threat that cannot actually be implemented in practice. The potential damage that can be done by this hollow threat—both to the process of Haredi integration and to the rule of law in Israel—is very great.

For this reason, it is MK Ayelet Shaked, who is proposing the use of significant economic incentives, who is correct. According to her proposal, which is in line with the proposal that I drafted with Dr. Zicherman under the auspices of the Israel Democracy Institute, failure to meet annual enlistment objectives will cause serious financial pressure by denying subsidies to the ultra-Orthodox totaling hundreds of millions shekel a year—pressure that will increase from year to year. This proposal is extremely effective, since the ultra-Orthodox community will not be able to maintain its current lifestyle over time without financial support from the government. At the same time, however, the proposed framework does not damage the heart and soul of the Haredi community, as it is not threatening to imprison individuals whose "soul yearns for Torah." An appropriate dose of economic incentives, which is sensitive to the human rights of the ultra-Orthodox, will convince the Haredim to return to the classic model of the relationship between the tribes of Issachar and Zebulun, in which there is a division between people who are Torah scholars themselves and those who support the world of Torah study. The former group will be comprised of 1,800 men a year, while the balance—the majority—will share the burden of military service, will provide for the physical needs of the ultra-Orthodox community, and will be considered full partners in fulfilling the mitzvah of Torah study.

Is the proposed solution suggesting that army exemptions be bought? Clearly not; it is the study of Torah that is granting the exemption, not the money. Accordingly, an ultra-Orthodox man of draft age who is not engaged in Torah study and does not report for service will be considered a draft dodger, and will be subject to criminal sanctions even if he offers a house full of gold and silver. The Haredim agree: as far as they are concerned, draft dodgers constitute an imminent danger to the Torah world. The heads of the yeshivot will lose their jobs if Haredim don't serve, since their institutions will be shut down. Deferment of service will only be possible for the minority of ultra-Orthodox men who are actually devoting their lives to full-time Torah study.

There is no denying that an arrangement that is based on economic incentives violates the principle of equality, since young men in the ultra-Orthodox community who do not receive an exemption from the army as part of the quota of Torah scholars but do not enlist and continue their Torah study nonetheless will be penalized with economic sanctions, while men from other sectors of Israeli society who dodge the draft are subject to imprisonment. However, the Supreme Court has already determined that while equality is an important value that we must strive to attain, "the democratic process is based on the recognition that it is not always possible to achieve the goal of equality between different groups in society by means of absolute formulas. It relies on a deep understanding of the social reality in all its complexity, and a view that achieving equality may require a gradual social process...." Have we forgotten the historical lesson, burned into our national flesh, that "Jerusalem was destroyed only because they gave judgments based on [strict] Torah law"? Noble calls for equality sound good and are roundly applauded in the town square, but such equality may turn out to be a recipe for social destruction.

It is essential not to miss this rare, historic opportunity to include the ultra-Orthodox community in sharing the burden of sovereignty. For this reason, we must resist the temptation to adopt proposals calling for "equality now," which cannot be implemented and will do more harm than good. Instead, we must realize the desire to achieve equality, in the words of Justice Ayala Procaccia, "step by step, without breaking existing systems" and without "destroying the delicate social-human fabric" of Israeli society.

A Hebrew version of this article was originally printed in Makor Rishon on November 22, 2013.