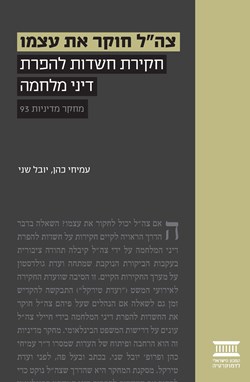 In order to strengthen implementation of the provisions of humanitarian international law, international criminal tribunals and commissions of inquiry, such as the Goldstone Commission have been established in recent years. Moreover, lively debate in the diplomatic, political, legal, and academic arenas accompanies the question of what rules and mechanisms a state that is involved in armed conflict should adopt in order to investigate suspicions of violation of relevant international laws.

The first issue that the study deals with at length is the question of when to initiate an investigation. In this matter, we have found that the present policy of the Military Advocate General (MAG) Corps leaves too much flexibility as to the circumstances in which criminal investigation should be initiated, and permits too much room for an "operational inquiry" (or unit debriefing) as a substitute for criminal investigation. As a result, criminal investigative methods were employed at too late a stage in the investigation process and in a manner that did not permit adherence to the international law principle of "effective investigation," if indeed such methods were employed at all. The study calls for the adoption of clearer criteria with respect to initiating a military investigation, and the reduction of the use of operational inquiries as a substitute for a full investigation. Our recommendation is that the Military Advocate General order the initiation of a criminal investigation not only in any case in which there are allegations or suspicions regarding a serious criminal offense, but also in any case in which there was a civilian death or serious injury to civilians, that was, as it appeared, unexpected or unjustified.

The second issue this study deals with is whether the IDF criminal investigations meet the conditions set forth by international law for handling inquiries regarding violations of the laws applicable to situations of armed conflict-primarily the requirement that the investigation be independent, impartial, and efficient. The study concludes that the central problem in the IDF's handling of the investigations lies in the low level of civilian supervision over these investigations and the MAG's decision-making process. After evaluating the tools at the disposal of the Ministry of Justice and the Supreme Court, we have concluded that the MAG operates without any effective outside civilian supervision. The problem is exacerbated in view of the MAG's dual roles-he is the chief legal counsel to the military, as well as the highest official making the decision as to the initiation of investigations and filing of indictments for suspected violations of international law.

The third issue the study deals with is the manner in which an examination of general policy and the decisions of the political level should be carried out where there is a suspicion that they are in contravention of international law. We are not asserting that there should be an actual criminal investigation in such cases, but we point out that no legal examination of these subjects is carried out in Israel, and there is no outside supervision of the decisions of the political level in terms of their adherence to the provisions of international law (except for the theoretical possibility that criminal investigations could be carried out in such cases by the Attorney General, a possibility that has never been resorted to).

While with respect to the first issue a solution may be adopted in the framework of the existing structure, the last two issues must be rethought with respect to the existing investigatory institutions. In this context, we propose establishing a permanent civilian body that would have supervisory authority of investigations, as well as authority to examine a specific policy adopted at the political level. The study includes a detailed proposal to establish such an institution, including its structure, authority, and the principles according to which it would operate. This body would carry out external supervision of the decisions of the MAG regarding initiation of investigations and filing indictments, and would be able to examine the decisions of the political level and the degree to which they are consistent with the rules of international law.