IDI Vice President Prof. Yedidia Stern reflects on the privilege of sacrifice and the necessity to maintain a Jewish Israel to justify that sacrifice, in an article published in The Jewish Week in honor of Remembrance Day for the Fallen of Israel's Wars and Victims of Terrorism 2014. 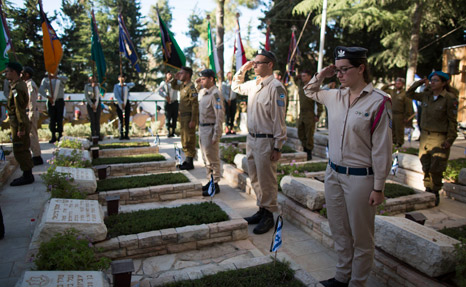 Israel is celebrating 66 years of independence, an independence acquired with the blood of thousands of young men and women who gave their lives for the nation while serving in its armed forces and other security agencies. This is why we observe Israel's Memorial Day for Fallen Soldiers and Israel's Independence Day on two—consecutive and very emotional—days. Every year on these days, the pain and the joy blend together until they are indistinguishable.

In my own home, one or more of my eight children will be serving in the Israel Defense Forces and endangering life and limb for Israel for the next 15 years. Why are we willing to bind our children to the nation's altar and hope with aching hearts that a guardian angel will produce Isaac's ram to be sacrificed in their place?

The standard response—that we do so to defend the physical security of all the nation's citizens—is insufficient. From a strict risk-benefit perspective, rational analysis clearly shows that it would be better to move to any other Western country. If the goal of the Zionist enterprise was to establish a normal democratic country with unassailable universal values, what do we need Israel for?  Why put ourselves and our children at risk?

In a global, democratic, and liberal world, there are wonderful substitutes for the dangerous puddle that is the Mediterranean Sea.

The only justifiable reason for taking that risk, on both the individual and collective levels, is that it permits the seminal experience of our generation—the realization of the dream of a Jewish nation-state. We are the happiest generation in 2,000 years of Jewish history. Unlike the generations who lived in the Exile, for us Judaism is not only spiritual, but also physical. It is not just an individual, family, and community faith, but also a national and political creed. Judaism without a state leaves the nation deficient, the civilization denuded, and the religion with clipped wings. We, the generation with a state, are tasked with the rebirth of Judaism.

The Jewish state is not just a matter of symbols—a flag, anthem, calendar, monuments—but also, and most importantly, the concrete realization of the Jewish way of life by a collective that bears responsibility for itself and for others. Only in a Jewish state can there be a public sphere in which the language of Jewish values is used to discuss human rights and responsibilities, the uses of military force (by a Jewish army), a welfare policy that goes beyond the community, the treatment of the national minority that lives within its borders, foreign and defense policy, and every other public issue. Only in a Jewish state can there be a public dialogue between the values of liberal democracy and Jewish tradition. A Jewish state is the necessary instrument for the internal and external tasks of reforming the nation and remaking the world.

A spiritual homeland that exists in our minds cannot suffice. We need a living reality that requires Jews to face up to the process of making national decisions and to deal with the consequences of those decisions. A Jewish state is indispensable because it allows the Jewish nation to blossom within its nation-state, permits the Jewish culture to thrive in the public sphere, and enables the Jewish religion to flourish as the Torah of the Land of Israel. Without a state of our own, the Jewish idea of the "good life" would remain painfully limited.

A universal democratic state offers no added Jewish value beyond that which could be gained through a strong and self-confident Diaspora community. Should Israel choose to be content with a "normal" democratic existence and renounce its Jewish distinctiveness, the demand that its citizens set aside their welfare on behalf of the country would be weakened. Our power and strength depend on our ability to endow Israel with meaningful Jewish content on the national, cultural, and religious planes.  As we commemorate this Memorial Day, we must continue to nourish the Jewish character of Israel—to secure the fate of Judaism and to justify the sacrifice of our wellbeing.

Yedidia Z. Stern is Vice President of the Israel Democracy Institute and a professor of law at Bar-Ilan University.

This article was originally published as "Memorial Day for the Happiest Generation" in The Jewish Week on May 5, 2014.