The haredi school system plays a significant role in Jewish education and in Israel’s education system in general. Over the years, it has seen rapid demographic growth coupled with systemic and structural changes, among them the establishment of a haredi division in the Ministry of Education. In the 2012/2013 school year, 23% of students in the Jewish education system studied in educational institutions under haredi supervision, comprising 17% of the entire Israeli school system. But influenced by the rise of the state and state-religious systems, the growth rate of haredi schools slowed to 0.5% per year between 2008 and 2013. Some 76% of students in educational settings under haredi supervision study in one of two “recognized but unofficial” networks (Hahinuch Ha’atzma’i and Ma’ayan Hahinuch Hatorani), while 24% attend schools that are partially exempt from certain Ministry of Education requirements (4% of elementary-age girls and 43% of boys study in exempt schools). In the decade from 2004 to 2013, the recognized networks grew in strength: 52% of male haredi students having studied there in 2004/2005, a figure that rose to 57% by 2012/2013.

The drop-out rate from haredi institutions (roughly 3,000 students annually) is greater than that in state or state-religious schools. The highest proportion of drop-outs is in boys’ secondary schools (3.5%, twice the comparable rate of 1.7% in the state school system). Overall, the drop-out rate totals some 20%, calculated over a six-year period. This rate has decreased by one half since the 2006/2007 school year, when it topped 6% annually in the boys’ secondary school system.

Students in the haredi secondary school system are divided between localities where all, or virtually all, pupils are haredi (for example, Bnei Brak and Modi’in Illit); cities where haredim constitute 50% or more of the students (for example, Jerusalem and Beit Shemesh); and cities where they constitute a sizeable majority (for example, Ashdod and Petach Tikva). Close to 80% of haredi students (of these, over two thirds of the male students) attend high school in their own community. Between 2004 and 2013, there was a slight decline in the share of haredi female secondary school students studying outside their community (from 16% to 13%), unlike their male counterparts.

In 2015, the number of yeshiva students totaled approximately 108,000, 65% of them married and the remainder single. This population grew by about 4% a year between 2003 and 2015, matching the growth rate of the haredi community as a whole. From 2012 to 2014, the number of single and married yeshiva students declined by 8%, apparently due to the exemption required under the new conscription law as well as the reduction in state support for yeshivas and kollels (yeshivas for married men). In 2015, the number of yeshiva students surged by 14.5%, in response to the influx of state funding for yeshivas and kollels as a result of the return of the haredi parties to the government coalition.

In the Central Bureau of Statistics (CBS) social survey for 2013/2014, 19% of the haredi population reported that it was pursuing, or had pursued, an academic degree—a noticeable increase over 2007/2008, when the figure was 15%. In addition, the share of women engaged in academic study (23%) was much greater than that of men (15%). 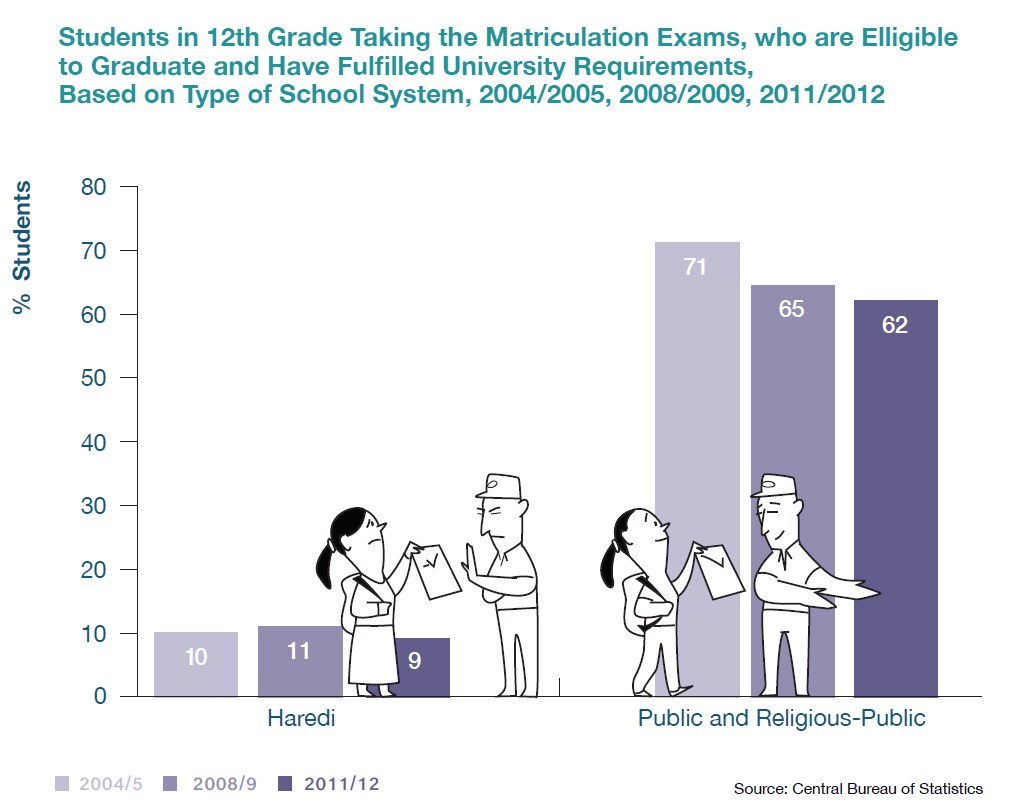 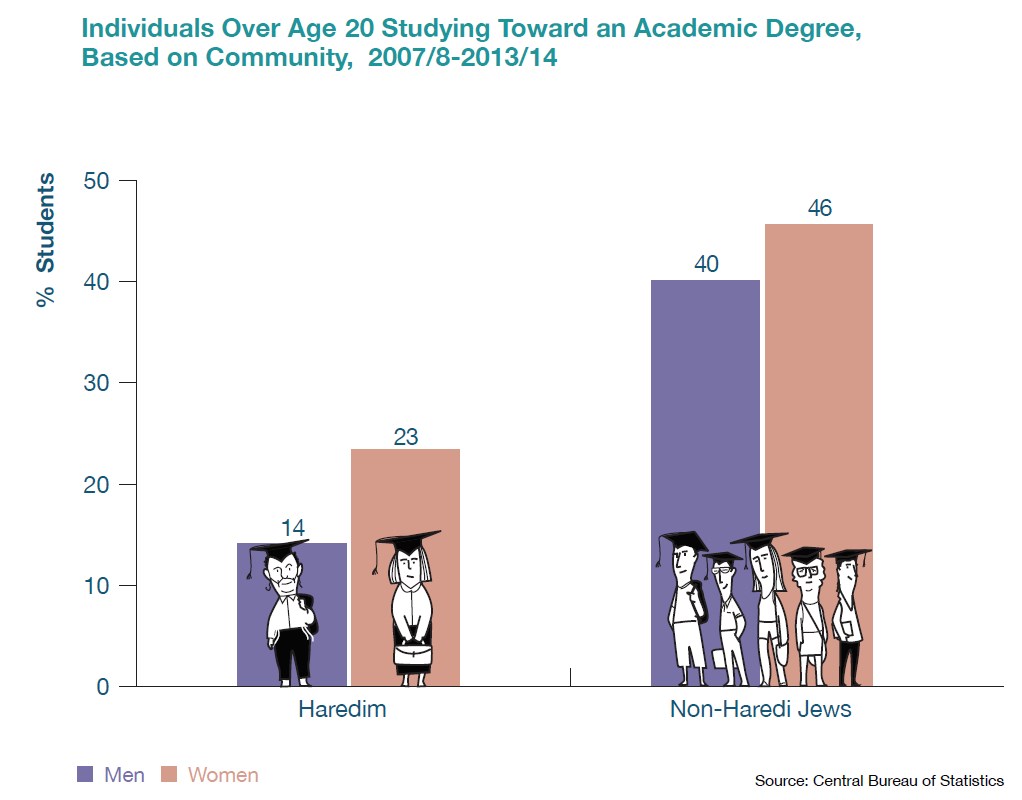