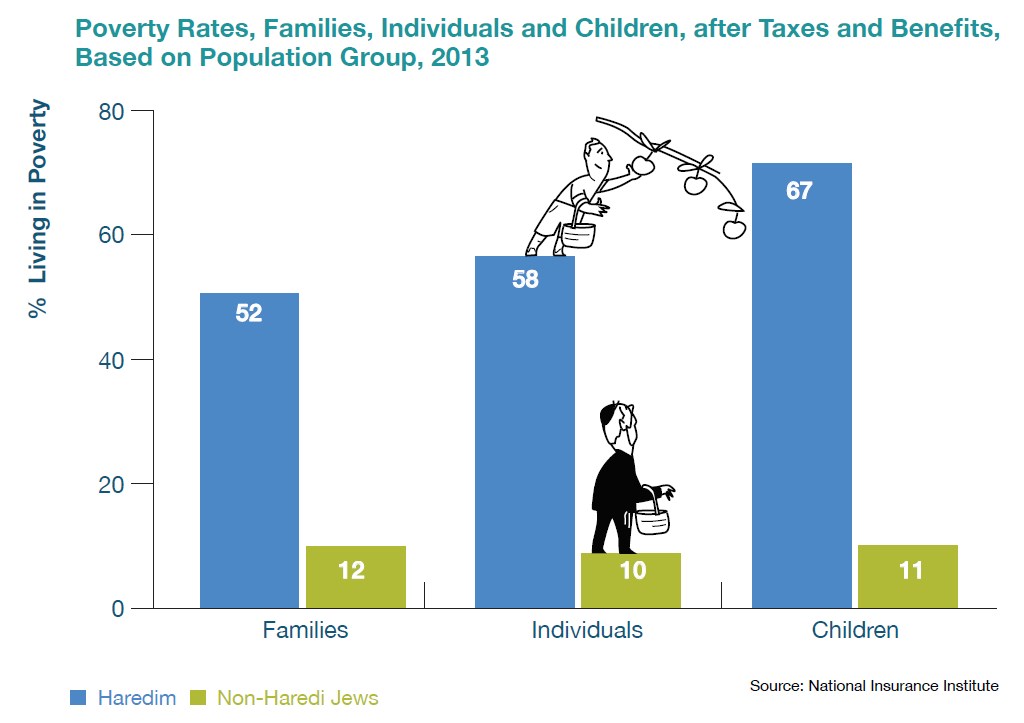 The proportion of the haredi community living beneath the poverty line is much greater than that of the general population (52% as opposed to 19%), with poverty levels among haredim remaining constant since 2006. A majority of haredi families are living in poverty, and the share of haredi children defined as poor is extremely high (67%). A quarter of haredi families suffer from food insecurity and per capita income is 47% lower than that of the general public. At the same time, the percentage of haredim who report being very satisfied with their lives is double that of Israeli society as a whole, and a similar share of haredi Jews state that they are satisfied with their financial situation.

The proportion of apartment owners among haredi and non-haredi Jews is similar, at roughly 75%. However, the share of haredim who own more than one apartment is lower than that of the non-haredi Jewish population (7% and 10%). The cost of an average apartment in five selected haredi communities (Elad, Beit Shemesh, Modi’in Illit, Beitar Illit and Bnei Brak) is lower than in the rest of Israel. The steepest rise in housing prices has occurred in Beit Shemesh, followed by Bnei Brak and Elad, and finally, Beitar Illit and Modi’in Illit.

With regard to car ownership, the gap between haredi and non-haredi society remains high (37% versus 77%), but here too—as in other consumer indicators—we see an upward trend in the haredi sector from 2004 to 2014.