Employment is one of the focal points of public discourse on the integration of the haredi community in Israeli society. As shown in this chapter, there are profound differences between the haredi, overall Israeli, and non-haredi Jewish populations when it comes to workforce participation, employment rates, and income levels of individuals and households.

In 2015, haredi participation rates in the workforce (people who are either employed or are actively looking for work) stood at 65% as compared with 87% in the rest of the Jewish population. The gap is even more pronounced among males: 54% as opposed to 91%, in the haredi and non-haredi Jewish populations. Among females, the gap in workforce participation is smaller with 78% employment among haredi women versus 84% among non-haredi Jewish women.

Employment rates are the most frequently cited statistic when discussing the issue of haredim in the workforce. In 2015, the employment rate for haredi males stood at 50%, as contrasted with 87% among non-haredi Jewish men. Among women, the corresponding figures were 73% and 81%. Unemployment in the working-age population dropped sharply between 2003 and 2015 in the non-haredi Jewish population. However, the employment rate in the haredi sector climbed steeply between 2003 and 2015 from 36% to 50% among males, and from 51% to 73% among females. 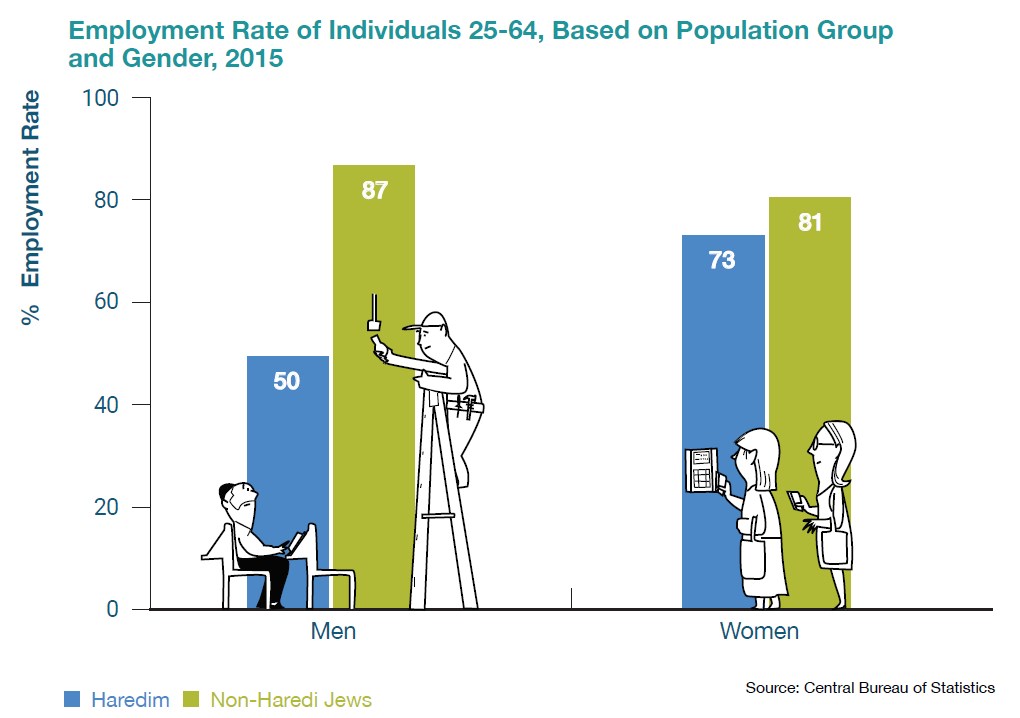 There are noticeable gaps between the haredi and general populations with regards to income level, as well: in 2013/2014, haredi workers (both men and women) earned just 71% of the average monthly salary in Israel.
Among men, this disparity stemmed primarily from low hourly wages, whereas among women the main reason was fewer work hours (83% and 78% of the corresponding figures for the general population). A comparison between National Insurance Institute figures for the general population and four haredi cities shows even greater differences, with haredi workers on average earning 65% of the mean income of the general workforce in 2013. A combination of low employment rates (both men and women) and low earnings led to a situation where the income level of an average household in the four haredi cities was 46% that of the average for households elsewhere in Israel. 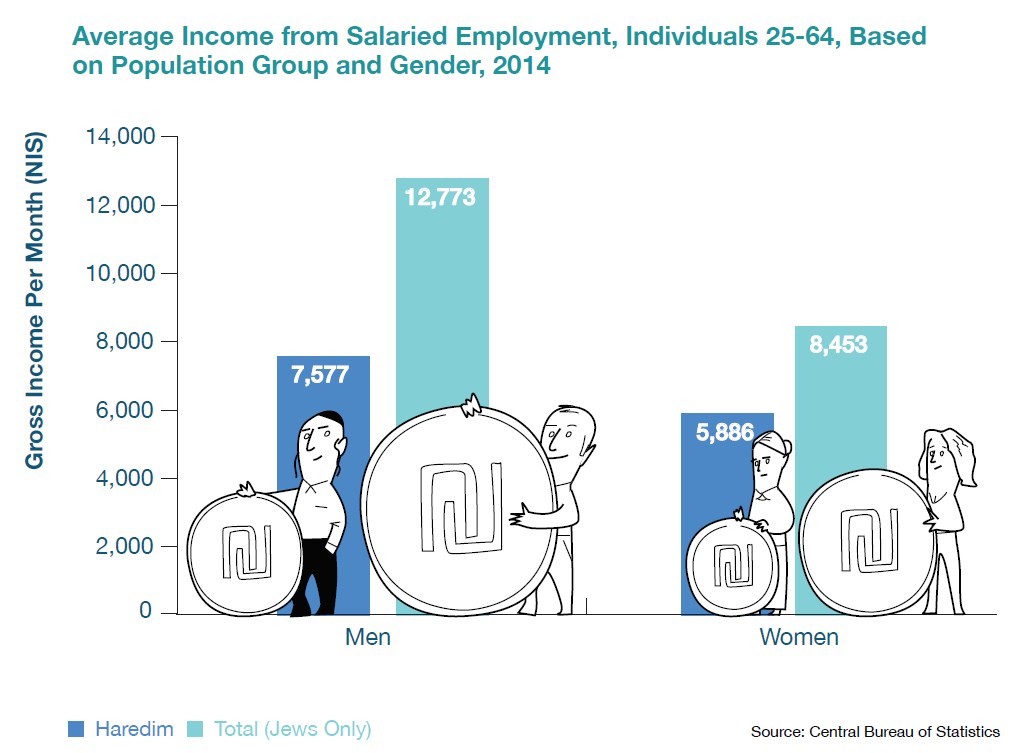 The disparities in workload (full-time vs. part-time employment) between haredim and non-haredim are reflected in the fact that in 2013/2014, 38% of haredi employees, as opposed to 19% of non-haredi Jewish workers, worked less than 35 hours a week. Differences in work hours are more salient among haredi women, with 59% working less than 35 hours a week versus only 24% of non-haredi Jewish women. Roughly half (49%) of haredim work part time. They cite challenges finding full-time work and childcare responsibilities as reasons for this situation. Additionally, 28% of haredi employees state that they work part time due to the nature of the job or a lack of desire to work full time, similar to 25% rate among non-haredi Jews. 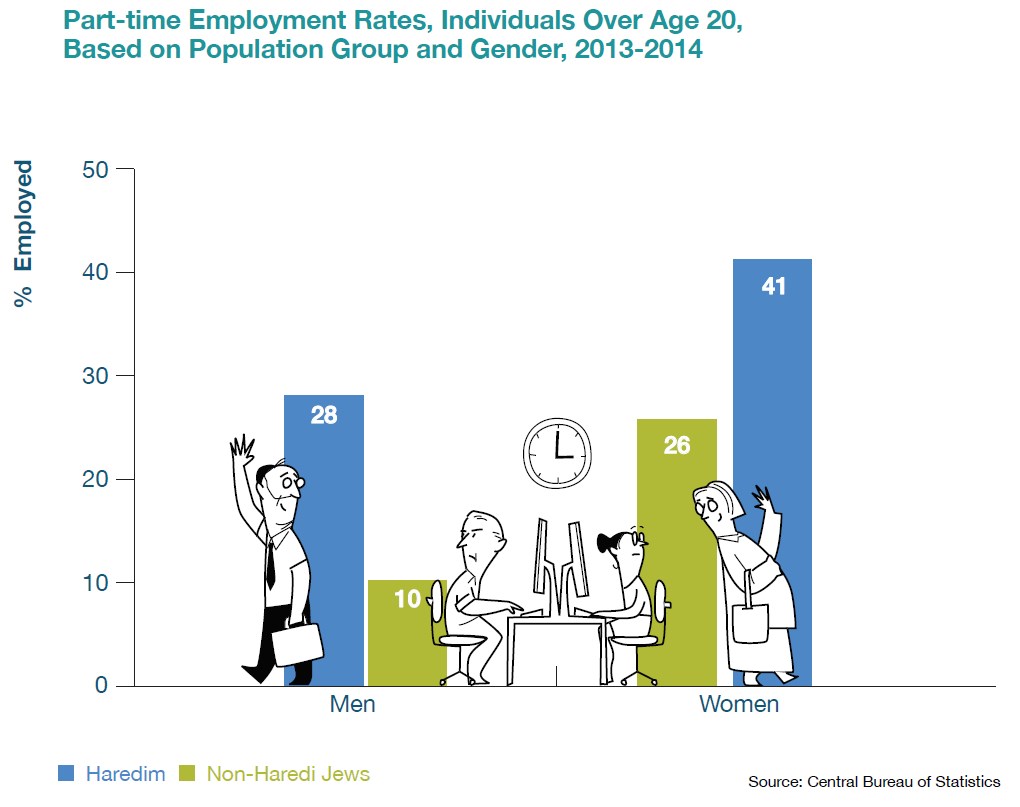 The proportion of haredi employees who have a pension plan is very close to that of the general population, representing a significant increase from the 62% of haredi workers with pensions in 2008 to a figure of 86% in 2014.
A comparison between the four haredi cities in a range of parameters demonstrated that Elad tops the others in employment rates and average income level, followed by (in descending order) Bnei Brak, Beitar Illit, and Modi’in Illit.