Ultra-Orthodox lifestyles in Israel are in a state of constant flux and reflect the evolving relationship between the ultra-Orthodox community and Israeli society. One of the near-sacred components of the Israeli ethos and which is core to Israelis' identity, is military service. The fact that so few Haredim serve in the IDF has created a huge gulf between the community and mainstream Israeli society and is a major source of the Israeli public's resentment of the ultra-Orthodox. The situation is not improving; on the contrary, in recent years we are seeing a decline in the numbers in military, in military and national civilian service: Only 1,222 ultra-Orthodox men entered military service in 2019, and just 495 entered national civilian service in 2020.

However, in other areas, the gaps between ultra-Orthodox and other Jewish Israelis are narrowing: Into the use a computers (62% among ultra-Orthodox Israelis, compared with 79% amongother Jews) and of the internet (60% compared with 92%, respectively). In addition, there is an increase in the number of ultra-Orthodox who have access to a car and the number holding driving licenses. These changes can be viewed as an indication that the trend towards social and economic integration into the Israeli mainstream is growing stronger. One of the main factors driving this trend is the increasing numbers of ultra-Orthodox men and women in colleges and universities and in the labor force. These developments translate into more available income, a growing orientation towards leisure and consumer culture, and the development of a new and growing ultra-Orthodox middle class. 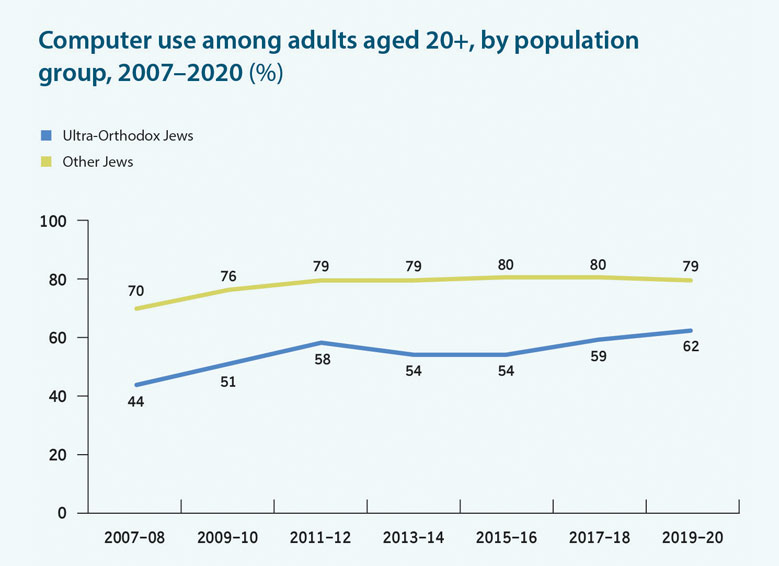 The 2001 Statistical Report also analyzes patterns of voting for ultra-Orthodox parties in elections for the Knesset- United Torah Judaism and Shas, with these patterns serving as an indicator of their political power, the geographical distribution of their supporters, and the internal composition of the population residing in locales with heavy concentrations of Haredim. Voting figures for United Torah Judaism and Shas (as a percentage of all votes cast) rose from 8.2% in 1992, to 12.8% in 2020. In addition, the geographical distribution of these voters has changed, as seen in the rising prominence of the "suburban ultra-Orthodox cities" and the relative decline in the percentage living in Jerusalem and Bnei Brak. 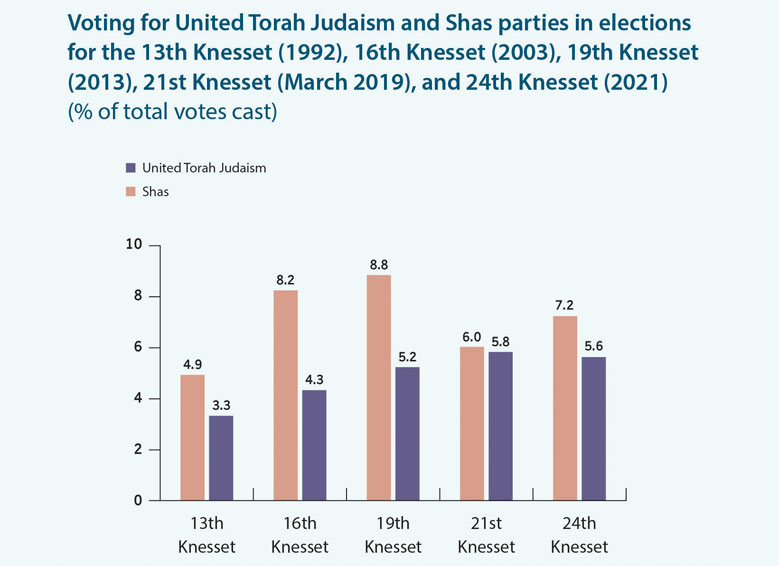