The COVID-19 pandemic, which reached Israel in March 2020, highlighted the advantages of the community-oriented nature of ultra-Orthodox society, but also underlined the need for internet access. Internet access, once regarded as a luxury or a social taboo, became an existential need—in the context of employment, education, communication with family members, and Torah study (remote study). This chapter examines the patterns of use of the internet and technology in the ultra-Orthodox population, compared with the rest of Jewish society in Israel.

Internet use among the ultra-Orthodox reached almost two-thirds (64%) in 2020, compared with just 28% in 2008, but still remains low in comparison to other Jews in Israel (93%). There is also a difference in how the internet is accessed, in that ultra-Orthodox Israelis tend mainly to use a home computer (42%) rather than a cellphone (30%) for going online, as compared with 26% and 72% respectively, among other Jews. 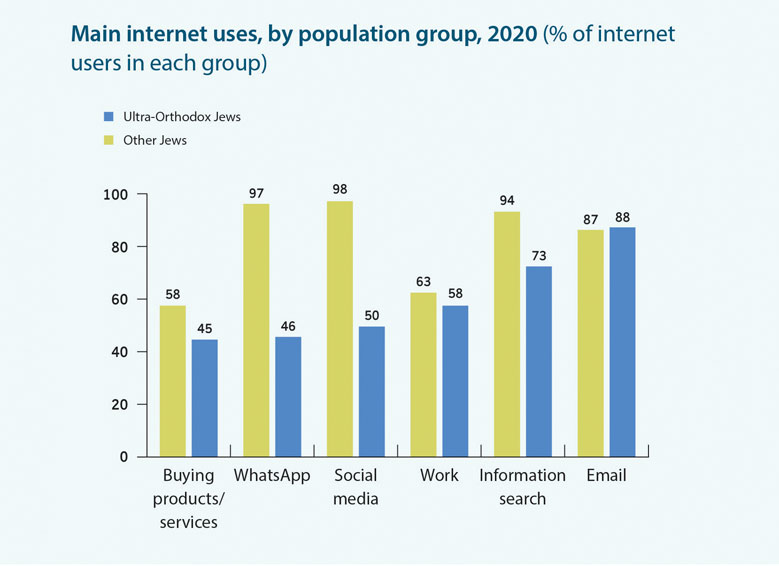 In the information age, digital literacy is considered an essential skill, impacting individuals’ prospects in the labor market. More than half (60%) of ultra-Orthodox Israelis view digital skills as key basic skills, a much lower share than found among other Jews (92%). This difference may be attributable in part to the fact that fewer ultra-Orthodox Israelis report needing digital skills in their daily lives: Only 37% require such skills for work, compared with 57% of other Jews.

Use of Digital Technology

Only around one-third (35%) of ultra-Orthodox internet users report that they are skilled in the use of new online digital technologies in their daily lives, compared with some two-thirds (63%) of other Jews. However, the proportion of those who report that they struggle to acquire new digital skills is low and identical in both population groups (28%). 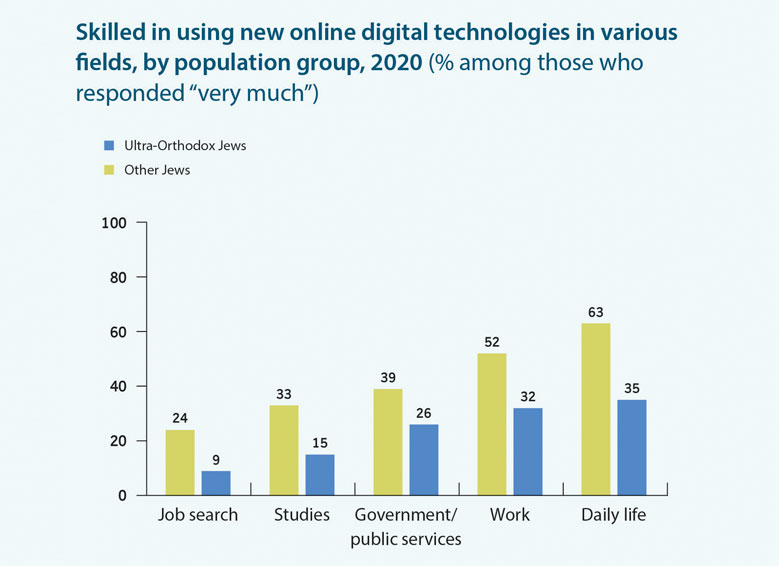 Ultra-Orthodox internet users are less likely to report having has a negative experience in their use of the internet: 14% were victims of internet crime, and 23% were exposed to harmful content (compared with 24% and 37%, respectively, among other Jewish internet users). Possible explanations for these differences include the relatively limited use of social media and the low number of younger internet users among the ultra-Orthodox.

Internet Use Among Children and Youth

Only 13% of ultra-Orthodox children and youth use the internet, compared with 75% of their peers among other Jews. Ultra-Orthodox parents restrict their children’s internet access more than do other Jewish parents (88% versus 57%, respectively), as well as the amount of time they are allowed to spend online (76% versus 62%, respectively). 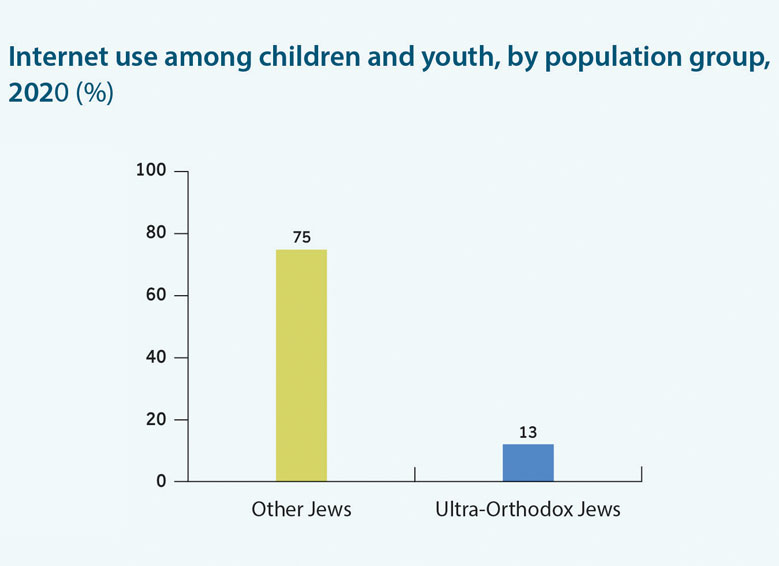 Ultra-Orthodox internet users have fewer virtual social relationships than other Jewish users (12% versus 18%, respectively), are far less likely to renew friendships over the internet (26% versus 51%), and make less use of online shared-interest groups (22% versus 44%), while hardly any of them register with dating sites (4% versus 19%). Ultra-Orthodox users are also less inclined to believe that technology improves family relationships (27%) and social relationships (28%), than are other Jewish users (54% and 57%, respectively).

When it comes to internet use, the ultra-Orthodox community is comprised of what we define as three main groups: The "conservative" group tends to ignore digital innovations and continues to ban internet use; the "pragmatic" group recognizes the need for using the internet and adopts it for the purposes of communication, information, work, and various services, while rejecting its social functions; and the "modern" group adopts most of the innovations that the internet has to offer. Members of this third group utilize various online platforms, including social media, and do not view the internet as a threat to their way of life.

Recent years have seen a considerable shift in ultra-Orthodox society toward greater internet use, and in the coming years we will discover whether this trend will continue to grow, not only in terms of its scope, but also in patterns of use.