The rate of demographic growth among the ultra-Orthodox (Haredi) population - approximately 4% a year - is the most rapid among all populations in developed countries, including in Israel. This unique pace of growth can be attributed to high fertility rates along with modern medical and living conditions, the young age at marriage in Haredi society and the large number of children per family.  One consequence of these patterns is the very young age of the ultra-Orthodox population in Israel - half its members are below the age of sixteen. 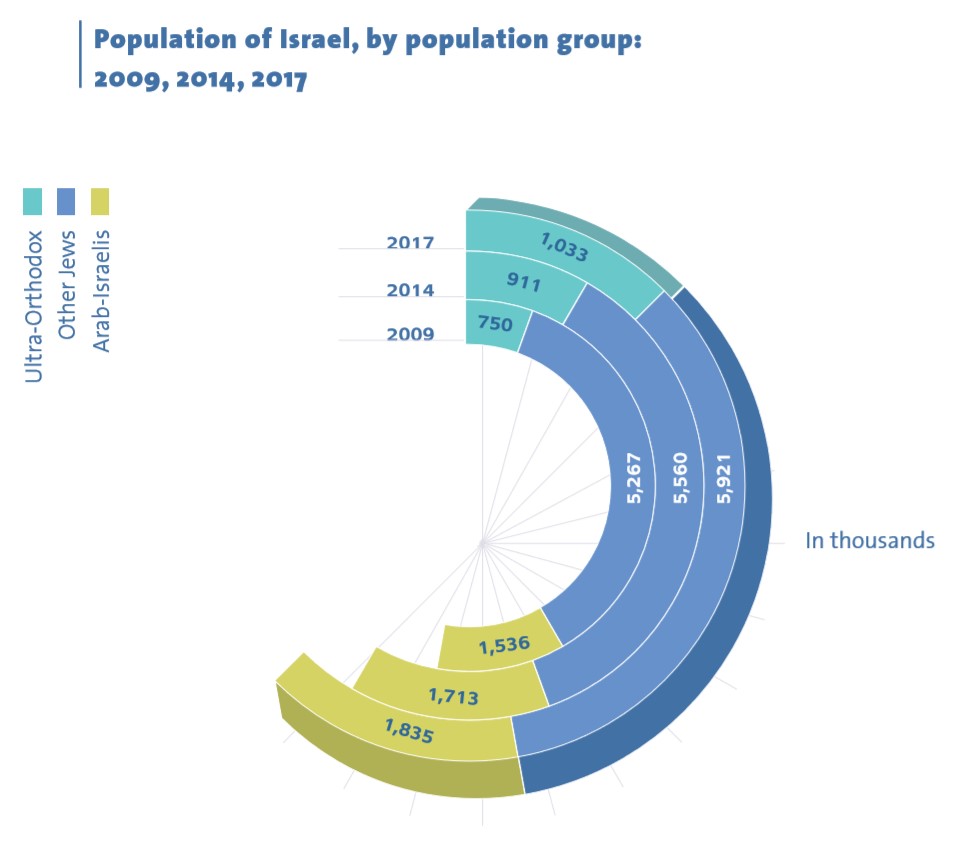 This rapid demographic growth has far-reaching implications for the economic, social, and political status of the ultra-Orthodox community, and attracts public, media, and political attention. For the first time the ultra-Orthodox population in Israel surpasses one million, numbering approximately 1,033,000 members as of the end of 2017 (as compared with approximately 750,000 in 2009).

According to Central Bureau of Statistics population projections, Israel’s ultra-Orthodox population, which currently comprises 12 % of the total population, is expected to reach 16 % of the total population by 2030, and to number 2,000,000 in 2033. Patterns of behavior within the Haredi nuclear family over the past decade show a slight decline in the fertility rate, from 7.5 between 2003 and 2005, to 6.9 between 2012 and 2014. These rates are still very high as compared with those in developed countries (less than two children per woman). The fertility rate for other Jewish women in Israel is 4.2 children among national-religious women; 3.0 children among traditional-religious women; 2.6 children among traditional-secular women; and 2.1 children among secular women.
Marriage rates among men and women ages 20 and over in the ultra-Orthodox population (82 %) are much higher than among the rest of the Jewish population (63 %). This difference can be attributed to the young age at marriage among the ultraOrthodox, despite the substantial rise in age in recent years. The rate of marriage between ages 20 and 24, which stood at 61 % between 2003 and 2004, fell to 56 % between 2010 and 2011 and to 44 % between 2015 and 2016.