The Issue: A major focus of public debate on the place of the ultra-Orthodox in Israeli society and a significant source of estrangement from this community, centers on the issue of employment. The gap in employment rates between the ultraOrthodox and the rest of Israel’s Jewish population reached its peak in 2003, at which time only about one-third of ultra-Orthodox men and only slightly more than half of ultraOrthodox women were employed.

Trends in employment rates: Between 2003 and 2016, employment rates increased among men and women alike, due to growing needs in the community and to a public policy facilitating their entrance into the workforce. As a result of this change, more than half of ultra-Orthodox men (52 %) and almost three-fourths of women (73 %) were employed in 2016. 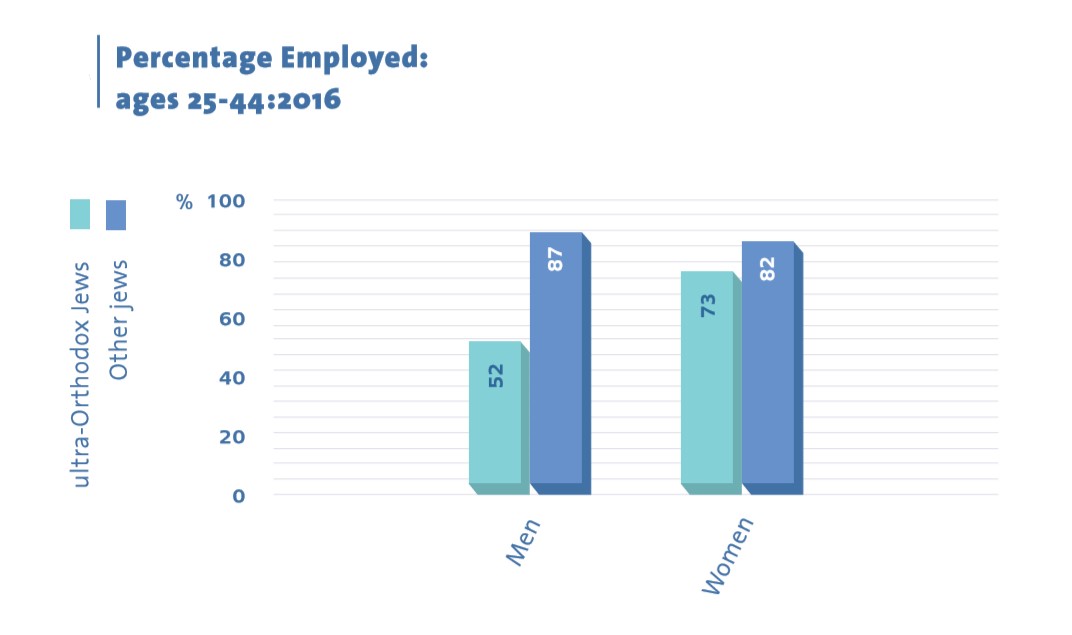 However, the impressive increase in employment rates over the last few years appears to have come to a halt. This standstill may be the result of the current government's coalition agreements (since the 2015 elections and up to this writing), and the rejoining of the ultra-Orthodox parties to the coalition. As part of these agreements, incentives for entering the workforce were reduced, and stipends for yeshiva and kollel students were increased.

Income from work: The integration of the ultra-Orthodox community into the workforce is reflected not only in rates of employment, but also in income levels. The average income level of ultra-Orthodox workers is 62 % that of other workers. This gap can be attributed to the fact that a large percentage of Haredim work fewer hours and in lower-paying economic branches. Thus for example, 28% of ultra-Orthodox men are working in the field of education as compared with only 5 % among other Jewish men. By contrast, the percentage employed in hi-tech (3 %) is much lower than among other Jewish men (13 %). The situation is fairly similar among ultra-Orthodox women; 42% vs. 28% and 4% vs. 7 % respectively.

Ultra-Orthodox perspectives on employment: Analysis of the data from the Central Bureau of Statistics Social Survey for 2016 reveals that the perspective of ultra-Orthodox workers on their employment is more as a source of income than as a career. This approach may lie at the basis of the relatively few among the ultra-Orthodox working in management positions (6 % as compared with 15 % among the general Jewish population) , which in turn implies that most ultra-Orthodox employees do not share in decision-making on their jobs, nor do they attend in-service training courses provided by their workplaces. This is also the case with regard to the use of technology. Only a small percentage (23 %) among the ultra-Orthodox use computers and the Internet on a regular basis on their jobs, and only 38 % have been exposed to technological innovations that have changed their work environment.

The orientation to work primarily as a way to earn a living rather than in terms of a career also affects prospects for advancement in the workforce. Among ultra-Orthodox workers, the percentage reporting having opportunities to advance on their jobs (41 %) is lower than among the general Jewish population (51 %). Their motivation for changing jobs is greater, and is mostly based on a desire for higher income rather than on a desire for self-fulfillment or for maximizing their potential.

However, there are signs of change: among younger members of the ultra-Orthodox community (ages 20-34), the perception of work as a career rather than just as a source of income is more prevalent. This age group cited aspects of employment such as self-fulfillment and utilizing one's abilities to the fullest as factors motivating them to change jobs, and a lower percentage among them cited financial considerations as a motivation for such a change (48% vs.77% among older groups).

Work Conditions: Assessing the working conditions of ultra-Orthodox employees is complex, and is linked to their perception of work in their lives. That is, as a result of the relatively insignificant place that work occupies in their lives, most are pleased with the balance they have struck between work, family, and leisure, and report—for example—never having had to work from home during their free time.

But at the same time, ultra-Orthodox workers report working conditions which are more pressured than those reported by their non-ultra-Orthodox peers. For example, they report that they cannot go out for breaks whenever they wish, or run errands in the middle of the workday (45 % as compared with 29 % among other Jewish employees). Their awareness of unions as a means for improving their working conditions or the desire for such improvement via unions is fairly weak, and the vast majority do not belong to a union (17 % as compared with 33 % of other Jewish employees) nor are they interested in joining.

Satisfaction on the job among ultra-Orthodox workers is high; in most cases it is equivalent to that of the general population and sometimes is even higher. This level of satisfaction is evidenced mainly with regard to a sense of value of their work (92 % of ultra-Orthodox employees feel that their work is valuable, as compared with 87 % of other Jewish employees), the sense that they are using their abilities to the fullest, and their report of good interpersonal relations in the workplace.

One surprising and important finding relates to discrimination. The vast majority of ultra-Orthodox employees report never having experienced discrimination on the job related to their way of life (97 % as compared with 98 % of other Jewish employees) or their gender, and never being asked to carry out a task that conflicted with their values (83 % as compared with 77 % of other Jewish employees) . This finding is particularly encouraging in light of the growing numbers of ultraOrthodox workers who in recent years, are more and more entering workplaces in environments that are not necessarily ultra-Orthodox. 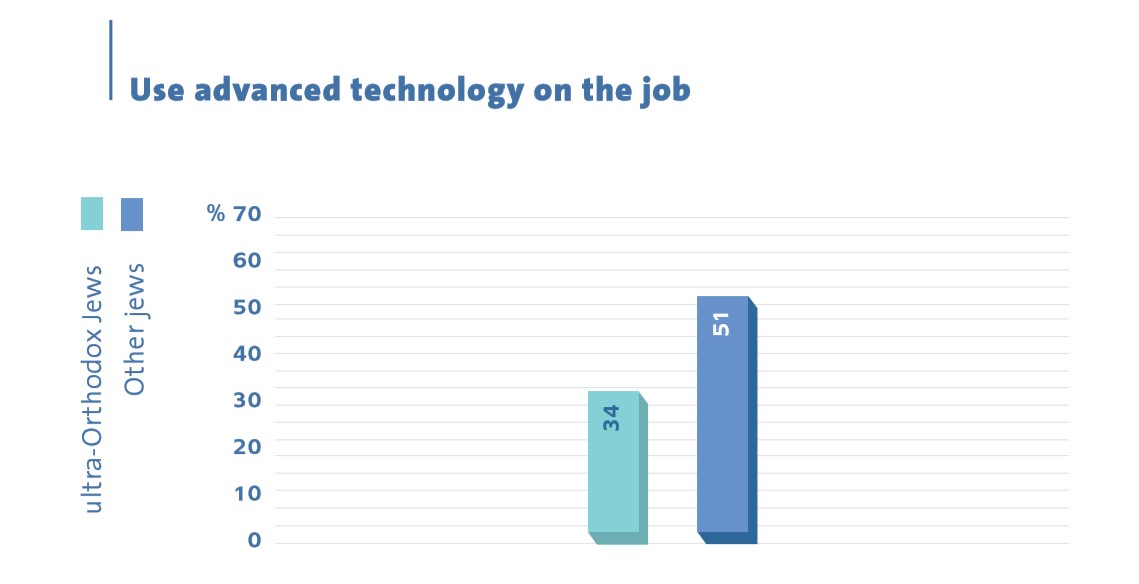